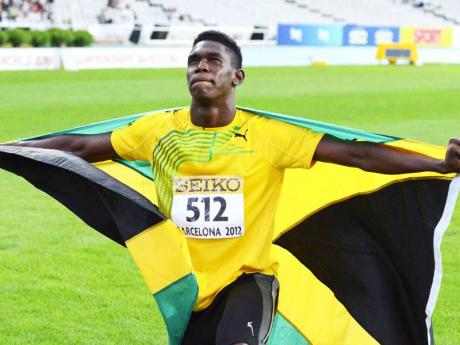 At the end of yesterday's third day, Jamaica was sixth on the medal table with one gold and one bronze medal following Odean Skeen's third in the 100m final on Wednesday.

Going into the championships, Dacres predicted that he would need to better his previous personal best of 61.55 metres to win a medal, and he did just that. He hurled the discus 62.80 metres on his second attempt - a distance good enough to beat Poland's Wojciech Praczyk, who threw 62.75 metres for silver with his final attempt. The bronze medal was captured by South Africa's Gerhard de Beer (61.57m).

The 18-year-old Dacres already held the distinction of being the first Jamaican to win a discus gold medal at an IAAF athletics championship following his victory at last year's IAAF World Youth Championships held in Lille, France.

"I feel really great ... . I came here kind of off, but I pulled off a big PB (personal best), and everything just worked out in my favour," Dacres said. "It feels great to know I have two in a row - World Youth and now World Juniors," he added.

Javon Francis, who was a surprise winner of his 400m semi-final, could not reproduce his heroics in the final and finished ninth.

Jamaica's juniors, who will be represented in five finals on today's fourth day, could again hear the country's national anthem in this large stadium.

Jamaica's other representative in the event, Tyquendo Tracey, did not get past the heats, as his time, 21.47 seconds, was only good enough for fifth in heat four.

Munro College's Delano Williams, who is representing the Turks and Caicos Islands, also qualified for the final, finishing second in his semi-final heat in 20.94 seconds (-4.5m/s). Williams won the sprint double at both Boys and Girls Championships and Western Champs earlier this year.

The women's equivalent set for 1:15 p.m. ( Ja time) will feature Shericka Jackson, who after running her season best in the heats of 23.35 seconds, had a poor start in the semi-finals that saw her playing catch-up. She ran on for second, stopping the clock at 23.58 seconds (-2.4m/s) to advance as the slowest qualifier.

Jodean Williams, who ran a personal best of 23.88 seconds in the morning's first round, failed to make the final after finishing fourth in her semi-final heat in 23.94 seconds (-0.8 m/s).

Chrisaan Gordon and Opal James are the fifth and sixth fastest qualifiers respectively going into the women's 400m final which is set to run-off at 1:30 p.m. (Ja time),

Gordon sat on the track after her semi-final in which she placed fourth in a time of 52.70 seconds. She was seen favouring her left leg and had to stretchered off.

James ran a season best 52.71 to finish second in semi-final three and secure her spot.

Javern Gallimore, who on Wednesday, had to be treated by the medical staff at the championships after a dizzy spell and complaints of feeling weak, surprised many with a new personal best (PB) and World Junior leading time of 50.45 seconds in the semi-finals of the 400m hurdles to establish himself as the favourite going into today's 1 p.m. final. Gallimore's previous PB was 50.83 seconds.

"I hit the eighth hurdle and that threw me off bad, but I just continued, and I am pleased with the time, and I am going to go all out in the final," Gallimore shared.

Jamaica's other 400m hurdler, Shavon Barnes, did not make the final after placing fifth in his semi-final in 51.18 seconds.

Reigning World Youth long jump champion Chanice Porter made light work of yesterday's qualifying round as he cleared the automatic qualifying mark of 6.30 metres on the very first attempt to progress to the 12:55 p.m. final.

Female team captain and the world leader in the 400m hurdlers, Janieve Russell, comfortably won heat four in 58.57 seconds to secure a place in today's semi-finals at 12:35 p.m. She sported gold-coloured hair, which she disclosed was inspired by reigning 400m hurdles Olympics Gold medalist Melaine Walker.