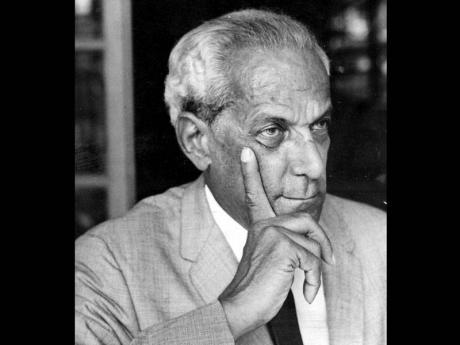 For Norman Manley, achievement of excellence was the norm; he was a world-class high-school athlete, Rhodes Scholar, decorated World War I military hero, prize man of Gray's Inn, acknowledged as the Caribbean's finest legal mind, and the first Jamaican to appear before the Judicial Committee of the Privy Council.

His wife and, incidentally, first cousin, Edna - as their mothers were sisters - was the country's most important sculptor, and a pioneering leader of Jamaica's indigenous artistic movement. Their home, Drumblair, was the hub of the nascent nation's cultural activities, and a gathering point for its leading intellectuals. He was, for a time, The Gleaner's music critic.

Norman Manley was the greatest lawyer in Jamaican history. A visiting colonial authority concluded, "Whenever a man in this country gets into trouble, he first flies to Mr Manley, and if Mr Manley is already retained, he next flies to Cuba."

Hotheads often threatened: "I will kill you and get Missah Manley to get me off!"

He was habitually retained by large firms to handle their affairs on a permanent basis, meaning he often fought cases on the employer's behalf. This made some claim, unfairly, that he was against the workers' interests.

Popular legend has it that when Marcus Garvey was convicted and jailed because of a plank in his People's Political Party platform in 1929, Manley was the prosecuting lawyer. But the case Manley won against Garvey was a suit defending a woman against libel in the UNIA Blackman magazine.

In 1937, Manley founded Jamaica Welfare, the first large-scale social-welfare organisation in the island. It originated from suggestions he made to United Fruit Company President Samuel Zemurray, while acting as lawyer for the Jamaica Banana Producers Association. Zemurray offered one cent per stem of United Fruit's Jamaican banana exports "to form a fund to be administered by an organisation to be created ... for the good and welfare of the people of Jamaica, with emphasis on the rural people". With the banana export trade at its height, the initial amount was over US$250,000.

Jamaica welfare's programme consisted largely of practical adult education, co-operative training, cottage industries, and group activity in agriculture and manufacturing. After the 1938 disturbances, the British government adopted it as the model for improving the people's welfare throughout the troubled West Indies.

Manley tended to be reserved and formal, and did not suffer fools gladly. Former Gleaner Editor-in-Chief Theodore Sealy described him as, "Gamin and genius, shy yet arrogant, coldly analytical yet given to much emotion."

In his own self-analysis, "I suffered from a quick flaring temper, which it took me half a lifetime to control. Indeed, I doubt if I ever learnt. Constant, inhibiting violent efforts at control gradually wore it down till it seemed to disappear, with its place being taken by a sort of arrogant indifference which was eventually mistaken for the real me."

Manley was born to a black father and white mother, and his early years were filled with stress and gore.

"I grew up as a bushman. I earned my pocket money cleaning pastures and chipping logwood. I would go out in the morning … and get home late at night after 12 to 14 hours on the constant move. The result was that I was tough as hell and developed a stamina I have never seen surpassed … till I was 70, I did not regard a 15-hour day of concentrated work as excessive."

He lost his father when very young, his mother in high school, and his brother in the trenches of World War I, where he himself won a military medal for bravery. Some claim the colour prejudice Manley encountered in the army made him anti-British, but his unfinished autobiography contradicts this.

In September 1938, Manley was invited to head the country's first major political organisation, the People's National Party, by party architect O.T. Fairclough. He was elected chief minister in 1955 and 1959, and led negotiations for Jamaica's Independence in 1962.

No elected Jamaican government since 1944 has tried to entrench itself, nor had its legitimacy challenged, which in the end are the true tests of democracy. Every ruling regime has allowed mostly free and fair elections. All defeated parties have unhesitatingly accepted the will of the people, and peacefully awaited the next electoral contest. That, above all, is the magnificent legacy of Norman Manley and his cousin, Alexander Bustamante.

On Manley's death, Sealy wrote: "Norman Manley … had the mind and measure of the truly great anywhere … . His faults lay mainly in his virtues - his righteous sense of consistency; an almost fanatical loyalty to those who marched the rugged course of life beside him; a commitment to principle even when in political terms the practical course was sharply different on the nation's compass."