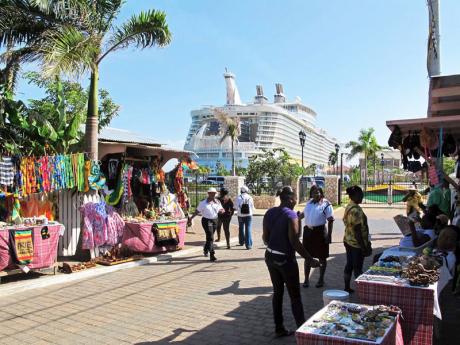 In this September 26, 2012, photo, the Royal Caribbean's Allure of the Seas cruise ship is docked in Falmouth, northern Jamaica, as street vendors sell clothes, souvenirs, and other goods to tourists. Trade groups say the flourishing cruise-ship industry injects about US$2 billion a year into the economies of the Caribbean, the world's No. 1 cruise destination, but critics complain it produces relatively little local revenue because so many passengers dine, shop, and purchase heavily marked-up shore excursions on the boats or splurge at international chain shops on the piers. -AP

Tourists emerge by the hundreds from a towering, 16-deck megaship docked at the Caribbean's newest cruise port in Falmouth.

They squint in the glare of the Jamaican sun, peer curiously at a gaggle of locals beyond a wrought-iron fence, and then roar out of town on a procession of air-conditioned tour buses.

Few stop to buy T-shirts, wooden figurines, or beach towels from the dozens of merchants lining the road outside the fence or visit the colonial-era buildings that dot the town.

Not many even venture beyond the terminal's gates unless it's in one of the buses that whisk them past increasingly disgruntled vendors and taxi drivers.

That's not the way townspeople in the old Jamaican sugar port of Falmouth were told it would be.

Jamaica's port authority and Royal Caribbean Cruises Limited pitched the US$220 million port as a place where passengers would dive into the historic city for "a wraparound experience not unlike Colonial Williamsburg, but one that is infused with the signature warmth of the Jamaican people".

Locals were told the tourists might spend more than US$100 each.

But since the industry's biggest ships started arriving early last year that warmth and those dollars have been kept at a distance.

"We were promised that we'd be able to show people our Jamaican heritage, sell our crafts. But most of the tourists stay far away from the local people. We're on the losing end," said Asburga Harwood, an independent tour guide and community historian.

Trade groups say the flourishing cruise-ship industry injects about US$2 billion a year into the economies of the Caribbean, the world's No. 1 cruise destination.

But critics complain it produces relatively little local revenue because so many passengers dine, shop, and purchase heavily marked-up shore excursions on the boats or splurge at international chain shops on the piers.

The World Bank said in a 2011 report on Jamaica that as much as 80 per cent of tourism earnings do not stay in the Caribbean region, one of the highest "leakage" rates in the world.

"In all-inclusive Caribbean hotels, it is common for only 20 per cent of revenue to be returned to the local economy. In the case of cruise ships, it will be much less, probably no more than five per cent," said Victor Bulmer-Thomas, a professor emeritus at London University who is an expert on Caribbean and Latin America economies.

A new report commissioned by the Florida-Caribbean Cruise Association trade group says passengers spent US$1.48 billion during port calls during the 2011-12 season at 21 regional destinations, including a few Central and South American nations with ports in the Caribbean.

But US$583 million of that money went for watches and jewellery bought in cruise destinations where international chains like Colombian Emeralds and Diamonds International dominate pier shopping.

An additional US$270 million went to shore excursions, which are typically sold by the cruise lines.

Just US$87 million went to local crafts and souvenirs, according to the report.

The criticism isn't confined to Jamaica. Some Caribbean ports are even designed to prevent interaction with the surrounding communities.

The visitors are prohibited from leaving the cruise line's property, which features white-sand beaches and one of the longest zip lines in the world.

"They should allow tourists to venture to the city. This would help the local economy," said Jean Cherenfant, mayor of nearby Cap-Haitien.

"The majority of the people (in Cap-Haitien) don't feel the presence of Royal Caribbean and the tourists."

But each passenger to Labadee pays a US$10 tax to the Haitian government, producing more than US$6 million a year for the impoverished nation.

In The Bahamas, Disney Cruise Line ships stop at the company's own private island, dubbed Castaway Cay, where locals work as massage therapists, bartenders, and drivers and supplies are brought in by the ships.

John Issa, former head of Jamaica's hotel association, said the cruise lines enjoy an unfair advantage over land-based businesses because regional governments fear the ships may pull out for a competing destination, while "once you put down a hotel, you are captive."

In one famous case, Carnival Cruise Lines withdrew from Grenada in 1999 amid a dispute over a US$1.50-a-head tax to pay for a new landfill.

"The governments are terrified of making more demands," Bulmer-Thomas said.

The cruise industry says the ships steadily bring in huge amounts of tourists who otherwise might never come at all, so any money they do spend is a gain.

While locals want more interaction with moneyed tourists, the visitors often have little interest in exploring the sometimes gritty reality of life in a Caribbean port.

"Folks on a Royal Caribbean cruise are not looking for culture or history for the most part. They want to shop. Go to the beach. And drink. Not necessarily in that order," said Heidi Barry Rodriguez, a librarian from Cary, North Carolina, who recently cruised on a vessel to Falmouth and didn't meet a single passenger who explored the town.

On a recent morning at Falmouth's port, tourists disembarked from Royal Caribbean's Allure of the Seas, a 5,400-passenger liner with a 3D movie theatre, ice rink, casino, and multiple restaurants and bars.

Most passengers were escorted on to buses destined for package tours in Jamaican resort Meccas about an hour's drive away.

One dejected vendor selling hair-braiding services shut her eyes and raised her hands skyward, praying aloud that she could make a little money.

But even passengers who skipped the packaged excursions mostly shopped at stores on the fenced-in pier or strolled along the town's waterfront trying to avoid locals hawking cha-cha rattles and tropical clothing.

"We don't discourage guests from going into the town of Falmouth, but many of our guests choose a Royal Caribbean excursion to see some of the country's beaches and famous attractions," said H.J. Harrison Liu, brand communications manager with Royal Caribbean.

Falmouth Mayor Garth Wilkinson said his town "is just not seeing the benefit to the cruise-ship port."

According to William Tatham, vice-president of Jamaica's port authority, that's because the city is still adapting to its new role as a resort town.

He noted that nearly all businesses in the town such as hardware suppliers, meat markets, and general stores are aimed at locals

"The problem in Falmouth is that the residents are not tourist savvy," Tatham said during a phone interview.

Paul Davy, father of two who sells wooden statues of roosters, fish, and other creatures outside the port, says locals are growing angry at the lack of opportunity.

"The pot is starting to boil, and trust me, it will boil over if things don't change around here," said Davy, who helped build the pier as a construction worker but turned to craft vending a year and a half ago.

"Why can't we, the people who actually live here, make a living off the cruise ships, too?"