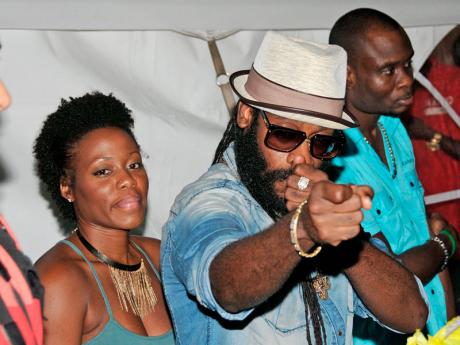 Tarrus Riley was in the house. 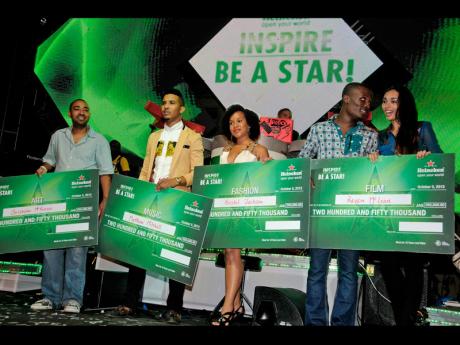 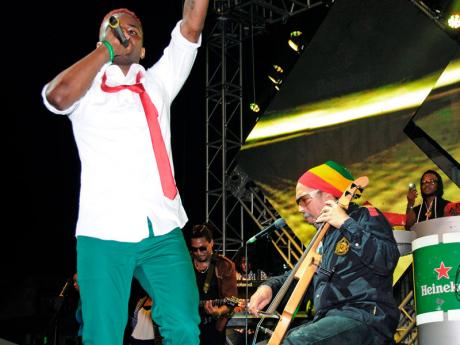 Konshens serves up a delightful performance.
1
2
3

Four very inspired Jamaican artisans each walked away from Fort Rocky in Kingston early Sunday morning with cheques for J$250,000 after being named category winners in the 2013 Heineken Inspire competition.

The aim of the competition is to unearth and help launch developing artistic talent in Jamaica in the category of film, art, fashion and music; and late Saturday night Rayon McLean, Christopher McKenzie, Crystal Jackson and Matthew Mitchell became the latest to emerge from scores of candidates selected during auditions held islandwide.

Finalists were selected, awarded $25,000 each and assigned mentors to help them further develop their respective projects. The consensus from the sponsors and judges was that the entries were of good quality.

"I wasn't surprised because last year was great, too," said Heineken Brand Manager Nasha Douglas. "The categories are what surprised me because last year, music was ridiculously overwhelming while film had a surprising number of entries. This year, art kicked everybody's butt and made it very challenging for us."

Douglas mentioned that she was impressed by one particular piece of art. It belonged to McKenzie, who created an 'infinity mirror' table with a floating Heineken bottle. The top of the table, he said, could be removed and used as a display. The table came with a chair that illuminated in red, but changed to green once someone sat in it. The artist, who is a banker by day, was thrilled that he won.

"This has opened a lot of opportunities for me now. A lot of people think that since I work in a bank, they think I am a banker. The first competition I entered was the Heineken Green Synergy, and they said I should stick to banking, but this was a new opportunity to prove that I am an artist."

His girlfriend, Santana Riley, was unable to contain her joy. "I'm his girlfriend," she said from behind a smile that rivalled the stage lights at the venue. "I knew he was going to win. I am so happy for him."

Jackson, part owner of a graphic design company and who studied fashion in college, said her pieces were inspired by life and how one has to "grab life".

"I started thinking about the Heineken drinker. These are the coming-of-age people who have their lives ahead of them, and I wanted to design something for that coming-of-age girl who is ready to grab life and run with it," she said. "Someone who is a little bit edgy, a little bit fun, but also ready to take on the seriousness of real life."

The pieces she submitted: a jacket, a top and a pair of pants, and two dresses - one of which was more of a fantasy dress. "All of the pieces played on the transparency of the Heineken bottle, and all the pieces spoke to the red star as well," she said.

Matthew Mitchell wants to be known as Machu Ezra, his stage name. He produced a R&B retro '90s song. "It's kind of like a groovy, feel-good type of song," he said, while holding on to the giant cardboard mock cheque he was presented with. "I feel very good about it. I'm very excited."

A graduate of Campion College and the University of Technology, Mitchell said the money would be put into developing his music career.

"It's not even for leisure; it's to fuel my career. I am inspired to be Jamaica's next R&B, reggae sensation," said the singer, who lists Maxi Priest and Bob Marley among his inspirations.

Film director Rayon McLean was inspired by the fact that people often tend to underestimate the human resource. He and his creative partner, Maya Wilkinson, used that to make magic happen and create the winning film.

"The film was about friends on a beach who find a Heineken bottle. One of them uses the bottle to make music, which inspired the imagination of the others. The film ends with the bottle falling back into the water and then reappearing on the beach to inspire others," he said, moments after he dragged Wilkinson on stage with him to collect his prize.

"It was fun to conceptualise and make real," said Wilkinson, who praised Rayon on his success. "He's a genius director. That's what he is."

'This year, art kicked everybody's butt and made it very challenging for us.' - Heineken Brand Manager Nasha Douglas