Bus fare to double for many when JUTC ends transfers Sunday 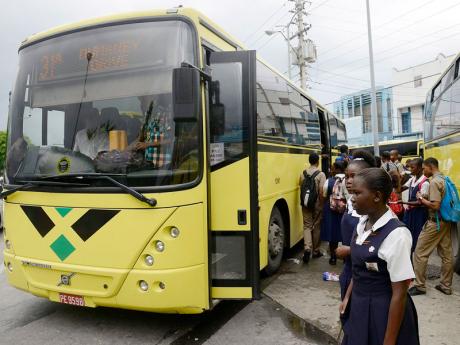 Passengers line up to board a JUTC bus at the North Parade bus park, downtown Kingston, yesterday. - Gladstone Taylor/Photographer

But the cash-strapped company says it has no option than to scrap the system, which is bleeding it of between $500,000 and $1 million daily.

According to the JUTC, the transfer service was offered to commuters at no cost and has been abused significantly by a number of persons.

"Everybody knows that the transfer system is not viable. You will agree that you cannot run a company like that," Clinton Clarke, marketing and communications manager at the JUTC, told The Gleaner.

"We are already operating on meagre fares and we have to ensure that the entity reduces the financial, losses it has been recording," added Clarke.

But JUTC commuters were up in arms yesterday, as they pointed to the increased cost they will face to get from one end of the city to the next.

In effect, some JUTC commuters will see a doubling of bus fares when the new system is introduced Sunday.

"This is devastating because there are times you cannot find even the $100 to come to work," one commuter said yesterday while in tears.

"I don't understand what they mean by abuse."