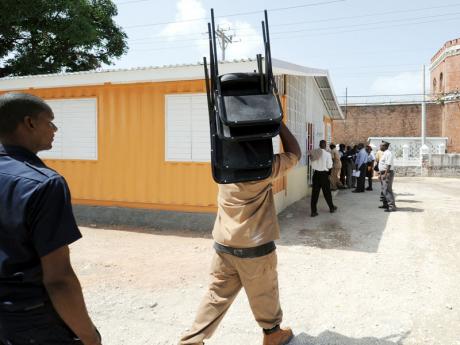 An inmate carries chairs to a section of the Tower Street Correctional Centre in Kingston. - File

The Department of Correctional Services (DCS) has confirmed a Sunday Gleaner report that it does not have a pharmacist on staff to dispense medication to prisoners.

However, the DCS says this is being addressed despite the difficulties involved, and that measures are in place to ensure that best practices are followed under the circumstances.

"At present, medication to inmates is dispensed to the institutions based on prescriptions written by medical doctors at the correctional facilities," said the DCS in a release issued yesterday.

"A pharmacy technician and a registered nurse fill the prescriptions, which are then checked off and recorded by inventory clerks. The consultant medical officer oversees this process," added the DCS.

Sunday Gleaner sources had indicated that the DCS was breaking the law by using pharmacy technicians and correctional officers to dispense drugs to prisoners.

This is a breach of the Pharmacy Act and medical experts warned that the prisoners could be in danger of being given wrong medication.

Yesterday, the DCS argued that efforts have been under way to resolve the issue regarding the absence of a pharmacist in the correctional system.

No pharmacist for 20 years

According to the DCS, checks have revealed that for nearly 20 years, there has been no established post for a pharmacist in the system, and, over the years, prison authorities have been asking for the post to be put back on the establishment.

The last such request was reportedly made in January 2013, when the DCS wrote the Ministry of Finance and Planning requesting permission to employ three pharmacists on a sessional basis.

"Permission was granted in August 2013, and advertisements were placed inviting pharmacists to apply.

"Six applications were received, and interviews will be conducted this week with a view to having the pharmacist work on a sessional basis," said the DCS.

"The fact is that it is extremely difficult to attract professionals to the service because of the salary scales in the government service.

"However, the Department of Correctional Services is making every effort to have the situation resolved in the shortest possible time," argued the DCS.

The prison administrators further argued that previous moves to take inmates to medical facilities for treatment and medication raised security concerns, as there were attempted escapes, inmates trying to meet with family members, and concern that critically ill inmates were being taken into the public space.