Social commentary at its best 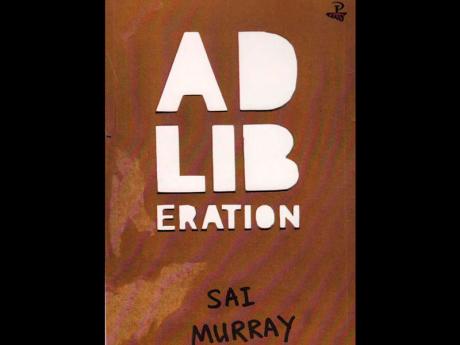 Bajan-born Sai Murray has produced a socio-political oeuvre that is as savvy and chic as his first name. His target is advertising, a profession he deems a villain that has shredded the artistry of poetry and driven a nail into independent thinking. The industrialists of this perverted art form are predatory and vampiric, holding the vial to entice, mesmerise and dupe an unsuspecting and gullible public. Murray is wry, witty and biting, a master at addressing, if not pummelling, a practice that has skewed reason, logic, and good taste.

Advertising today is a drug, engineered to hook all comers in a never-ending array of colourful blinders. He indicts the industry using the very words of an ad kingpin: "The truth is that marketing raises enormous ethical questions every day - at least it does if you are doing it right. I would rather be thought of as evil than useless." He literally journeys through the world of advertising, the places, the districts and boiler rooms where the propaganda is readied for delivery.

Murray's strength is rooted in his sardonic and sharp interplay of words, parallelisms, and self-deprecating delivery.

In AA, he likens our relationship with the world of advertisement to a junkie and injects the right jargon and spirit to define his thesis.

He writes, "I am an Adman. I have been clean for several years ... I am an addict - Brain damaged - a legacy for loquacious ad-libs. With the help of my family, friends and sponsor, I hope to control my ad-diction. I shall try to resist the compulsion to relapse."

Murray is a populist and revolutionary, naming names and righting wrongs. His candour and authenticity challenge the conscience of his nemesis.

But this art of duplicity has lived many years without an inkling of slowing down.

However, Murray is poised to answer back. He reflects on his past as an Adman, an addict and prostitute of his values. But he is clean now, has not relapsed and determined not to fall off the wagon. His prosaic protest is a brilliant metaphorical display that cements his credentials as a veritable wordsmith.

In one offering, his play on words and analogous musings on terrorism feature a poet who evades security to deliver his art on stage, only to "bomb". This is signature Murray. Creatively sharp.

His view of advertisement goes beyond the boundary of aesthetics. It is a tool of politicians and the wielders of social power, bent on distorting reality and labelling those who dare challenge the status quo. And Murray is in their cross hairs. His My Son is A Terrorist speaks volumes. Legitimate questions or protests against questionable governance and you are marked a terrorist. Fear, distrust, and suspicion are deceptively used to solidify political power.

"He looks like an Al Qaeda: beard needs a trim. I read a terrorist profile. Sounded just like him. He criticises government, shouts at politician on TV. Brainwashed by fanatics: No longer listens to me. Dangerous, a mind of his own, he could inspire others to think. We live near a mosque - That must surely be a link. Please arrest my son, tap his phone, spy upon email. He's embarrassing his mother, He needs to be jailed," Murray lashes out.

Murray's work is stamped with the spirit of liberation. But there is no liberation without a struggle as he etches in No IFS NO BUTS, arguably, the soul of this perceptive undertaking: "It lives in us all ... One cut too deep ... it rises. Blood. Revolution."

And amid the drumbeat of confrontation looms a revelation of a luminous tomorrow based on social justice, equanimity, and enlightenment: "In the end, there will be the word. The word of the inner God beyond flesh. Perfect combinations: Inner God + inner Goddess - For Ours is the Kingdom/ Queendom. Shared power, all glory. Forever and ever."

Murray's genre isn't easily identifiable. It is literal, cryptic and metaphysical; damning and hopeful. But he will have it no other way. It traverses standard poetry and prose. He uses his literary canvas well, quite well, but this is conscious art best delivered as a monologue. This is predictably Murray's element. From the page to the stage, one can only imagine words that breathe - enliven - words that dance before transfixed audiences. Oh, memories of Tracey Chapman's Talking about a Revolution.