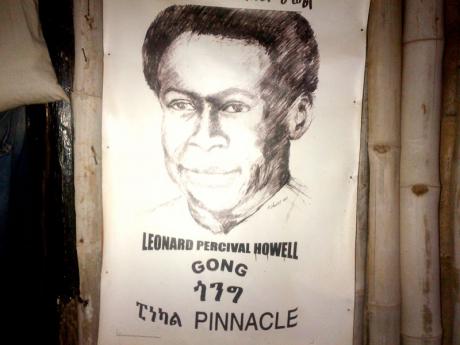 An artist's (B. Howell's) impression of Leonard P. Howell, widely regarded as The First Rasta and the settler of the first Rastafarian village in Jamaica, located at The Pinnacle in St Catherine.

Sligoville, St Catherine:On November 2, 1930, Ras Tafari Makonnen was crowned Emperor Haile Selassie I of Ethiopia in Africa. His supporters believe that he was the earthly manifestation of God or Jah. His birth, it is said, was foretold in the Bible and his lineage goes back several centuries before the birth of Christ. Selassie was born in 1892.

Six years later, in 1898, Leonard P. Howell was born in the parish of Clarendon, on June 16. At an early age, he migrated to the United States, where he joined Marcus Garvey's Universal Negro Improvement Association (UNIA).

Soon, Howell became one of Garvey's top-brass members, but Garvey and the UNIA were constantly under the radar of US authorities, which eventually arrested and charged Garvey for various crimes. Garvey was deported in 1928, and Howell was to follow him in 1932.

But Howell's activism switched from Garveyism to one that focused on the importance of Selassie I. He saw Selassie as the great Black Messiah, and he established the King of Kings Mission out of respect for Selassie, and appointed himself Selassie's representative in Jamaica. He also wrote the first book about Rastafarianism, The Promised Key.

In 1933, soon after his return to Jamaica, Howell stepped up his preaching on Selassie, which, in addition to his faith healing practices, earned him a huge following. In his book, Overstanding Rastafari - Jamaica's Gift to the World, Yasus Afari says, at the beginning of the 1930s, "the streets of Jamaica (Kingston and St Catherine in particular) were energised by the inspired preaching and teachings of the Honourable Leonard Howell, one of the earliest Rastafarian pioneers".

Howell was preaching 'doctrines' that were considered by the authorities as anti-Church and anti-government.

He was charged and sent to prison for sedition. But imprisonment did not shake the foundation of Howell's beliefs. Upon his release from prison in 1940, he set up the first Rastafarian village in Jamaica on 400 acres at Sligoville, St Catherine.

The settlement was called The Pinnacle because of its high hilltop elevation, and the residents became self-sufficient farmers. Howell's influence spread outside of The Pinnacle, and Rastafarian communities were set up across the country. The original Rasta camps were also regularly raided and dislocated by the police "as the governing class and conservative sectors of the Jamaican society became alarmed by the grossly misunderstood Rastafarians".

In 1941, government forces swooped down on Pinnacle and arrested many of Howell's followers. Howell fled, but he was eventually arrested, and on August 20, he was tried again for sedition and sentenced to two years in prison. When he was released in 1943, he returned to Pinnacle.

For almost a decade after his return, Pinnacle flourished as the residents were left alone to carry on their lives.

Trading and farming were their major sources of income, of which they earned a lot. The population also boomed as people saw Pinnacle as a place where they could go to prosper on their own. But the good life was not to last forever.

In 1954, government militia invaded Pinnacle and completely destroyed the village. The residents fled, but they were to subsequently return. Yet, Pinnacle never really got back to its heyday. However, the movement continued to proliferate in Jamaica and many parts of the world, but the persecution itself wasn't waning.

In Jamaica, the animosity involving the wider society and the Rastafarians culminated in bloodshed in 1963, in Coral Gardens, St James, when some Rastafarians and other civilians were involved in disturbances. The Jamaica Defence Force was called in and, "consequently, many Rastafarians were killed, beaten, intimidated brutally, trimmed, ridiculed, harassed and arrested", Afari says. "This unfortunate and brutal episode represented the most horrific experience of the Rastafarians in Jamaica."

As horrific as it may have been, the tragedy did not kill the resolve of the community which continued to expand in many ways. Howell died in 1981 at age 82, leaving a legacy of a movement that transcends races and classes, which has electrifying tentacles all over the world, and which is the subject of many studies, research, and college and university papers. Howell perhaps had no idea that the movement which he started on the streets of Kingston and St Catherine, and for which he was incarcerated, would have become one of the most influential movements of the 20th and 21st centuries, but, it is indeed.