Cindy finds out that Bob had Rita; Damian Marley is born 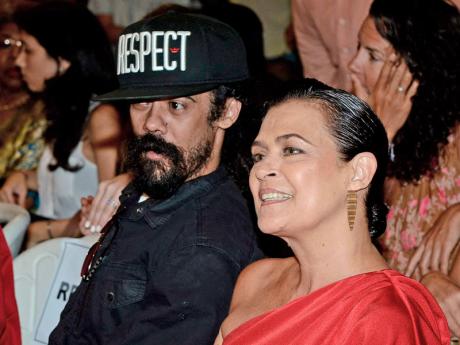 As if entering the Miss World contest hadn't already made Cindy Breakspeare an outsider, the beauty queen became pregnant with Bob Marley's child, Damian, in 1977.

She revealed during the annual Bob Marley Lecture organised by the Institute of Caribbean Studies and the Reggae Studies Unit, at the University of the West Indies, Mona, Thursday, February 13, that when she returned to Jamaica after a whirlwind trip, she was approached by Marley's mother, who told her he was actually married to Rita Marley.

This was something Marley denied to her, she said. However, already with child, she resigned herself to her fate.

Six months later, during her pregnancy, she was among the audience with Marley's mother Cedella, witnessing the joining of hands between political rivals, Michael Manley and Edward Seaga.

Marley had succeeded in effecting peace at the famous One Love Peace Concert of 1978.

Breakspeare, who carried the pregnancy up to nine months, said when her son was born, his father was away on tour and it was a month later that he met his offspring.

According to her, Rita and Sister Minnie came to visit the newest addition to the Marley clan, probably to see if he resembled his father.

"However, it was fine Damian's resemblance to his father was obvious from the day he was born."

Both herself and Rita, she said would go on to spend Christmas together at Marley's mother's home in Pine Crest, Florida.

Baby Damian was only two years old when his father died of cancer.

During an interview with The Gleaner in 2001, the former beauty queen said her relationship with Marley had been through some changes right before he fell ill and she had Damian.

"I sort of wanted to restructure my life a little bit. So we were dealing with all of that, but I mean, by then Bob was now a superstar, he really was, and he didn't really have the time to devote to that side of his life very much. So when he fell ill I just set that aside, Rita set her grievances aside, and we all rallied around him. It was all about him at that point, caring for somebody who was going through this terrible thing. None of us wanted to lose him, whether or not we were romantically involved with him."

Both women never had any confrontations, Breakspeare told The Gleaner then.

Two years ago while being interviewed on Bob Marley Day, Breakspeare said Marley's inspiration was now manifested through her son.

Breakspeare started her own business, Ital Craft in 1979, with friend Donna Coore, when her son Damian was about six months old. The business grew from strength to strength.

"We started from nothing, virtually. We went to Hellshire beach and dug up cactus, we bought clay pots and wrapped them in sisal string that we dyed and it was just whatever we could imagine to do or make."

She told The Gleaner back then that Marley used to visit and sit in the workshop.

"I started it at my home at the foot of Russell Heights because I had a self-contained cottage that was empty, so it was the perfect spot for a little workshop. So that was where we started. Bob would come up, man, and pull up a table to the bench and say, 'alright wha yuh wha mi fi do fi yuh now? Mi is a tradesman yuh nuh'.

"He used to bring me a lot of material whenever he would travel, things to make jewellery, lovely beads and bindings, quartz and stuff like that from London, one trip from Australia he brought shells ! Oh, you couldn't imagine. We were just flabbergasted when we saw them; they were the most amazing shells."

The relationship remained strong and in April of 1980 Marley was invited to Zimbabwe to perform for the Independence celebrations.

"They couldn't afford to pay him. The band and the cost of the equipment and stage light and sound for an event of that magnitude. So he spent his own money and shipped everything from London to make it happen," she said.

The stadium, she said, was packed to capacity but there were actually more people outside than inside. And those outside, dissatisfied with the fact that they were unable to see the man they revered, stormed the venue.

Media reports at the time showed police teargassing the arena, contributing to the total chaos.

"Such was the love and admiration for Bob in Africa. To understand the true significance of this occasion, one must watch the footage of the performance. See the looks on the faces of the people and feel the energy generated by the crowds. I think there was very nice footage on it in the documentary, Marley. Their hero was in the house."