Dispelling the myth that the Tainos are extinct 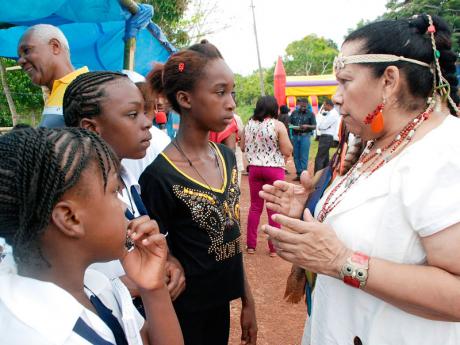 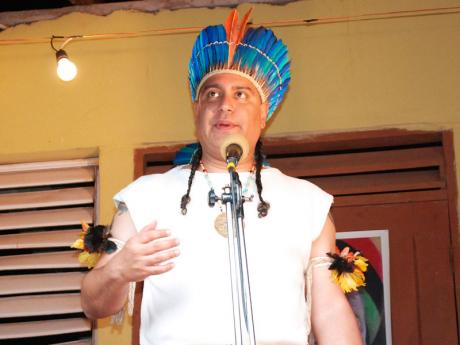 MANDEVILLE, Manchester:IT IS not an easy task to explain why the Tainos (incorrectly called Arawaks) cannot be found anywhere in Jamaica anymore.

However, if we use the example of the Indians who came from India as indentured servants in 1845, it may offer an explanation and a better understanding.

Nowadays, it is not common to find a family that can be classified as being 'full' Indian, as after 169 years, they have mixed, mainly with the African descendants, who form the majority of the population. To a very large extent, this also happened in the case of the Tainos.

A delegation of five Tainos came to Jamaica from February 20-24 to participate in the Marcus Garvey Fair. During their short stay, Cacique (leader) Roberto Mukaro Borrero, head of the United Confederation of Taino People, made a presentation at the Church Teachers' College Environmental Day in Manchester and visited Canoe Valley, which was home to the second-largest Taino settlement on the island.

In a radio interview, he explained that the history of the Tainos is evidenced through genetics (DNA) and the study of oral traditions. He further explained that deliberate action was taken by the United States Census Bureau in the 1800s to stop identifying the Tainos as an indigenous and distinct nation of people. As a result of this action, the Tainos were lumped into a category labelled as 'Free Peoples of Colour', which included Native Americans, (called Red Indians), Africans, and persons of mixed-race ancestry. So one year after the new census was taken, there were no more Tainos. Borrero said that this amounted to "paper genocide".

Another member of the delegation is Gary Gravesandy, who is Jamaican, born in Kingston. In the interview, he said that he represents the group - Taino Nation of the Antilles, which encompasses the entire Caribbean region. He is the 'Washerie', or head of Department of Cultural Affairs, which researches Taino history and languages. The Tainos spoke Arawakan, which is a linguistic range of languages that spans the Americas, and the word 'Tain' means 'good people'.

The delegation is involved in several projects that are geared towards teaching youth about their Taino ancestors. This is an effort to correct the false information contained in Euro-centric textbooks so that future generations can have authentic information that valorises the achievements of the Taino nation.

In his role as guest speaker, Borrero said that one of the first alliances formed in the western hemisphere was between the enslaved Africans and the Tainos. This is borne out by the fact that some of these Africans escaped from the plantations in the then parish of Vere (capital Alley) and established the community of Resource on the edge of the Canoe Valley. This valley was home to the second-largest Taino settlement on the island.

A 'pure' Taino family can no longer be found in the Canoe Valley, but the cultivation of their staple crops - cassava and sweet potato - is still carried on here. Their legacy of bammy-making is also preserved in the traditional Taino manner, which proves that the two cultures must have melded. Borrero said in his presentation that the island should never allow its connection to the land of its Taino ancestors to be broken "due to globalisation, which sometimes make us forget who we are by taking away the land and changing its name". He said, "Jamaicans should be proud of its indigenous name, Xyamaca."

The Tainos were showcased as the first Jamaicans at the annual fair that raises the profile of the first national hero, Marcus Garvey. The delegation came from Boriken in Puerto Rico and New York. They shared their culture from early afternoon until 6 p.m., concluding with the Friendship Dance. Patrons were asked to join the singing and dancing.