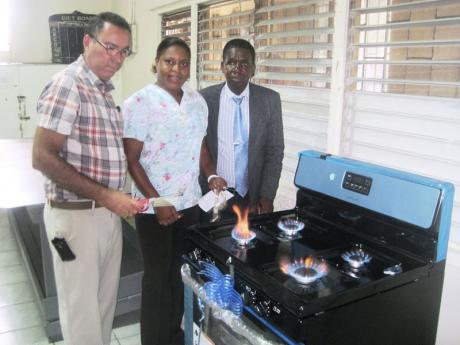 Member of Parliament for West Portland Daryl Vaz (left); matron at the Port Antonio Infirmary, Janet Golab; and Mayor of Port Antonio Benny White take part in the ceremonial lighting of a stove presented to the infirmary. -Photo by Gareth Davis

Following a voluntary salary cut just over one year ago, West Portland Member of Parliament Daryl Vaz says he has used that savings to assist the Port Antonio Infirmary.

Vaz last Thursday presented a 36-inch gas stove to the infirmary, which was bought from the money deducted from his MP salary.

"It is the first time that I am witnessing anything like this in Portland," said Fay Neufville, secretary/manager of the Portland Parish Council.

"A MP has taken a pay cut in his salary to reach out to the most needy in the society, and for that he needs to be commended. He has set the trend and I hope others will follow suit.

"The infirmary was without an oven for some time now, and I am well aware that baked products are heavily utilised here, and therefore they will now be able to carry out that function on a brand new stove fitted with an oven, so as to provide the residents with baked goods and other forms of pastry items," added Neufville.

In June 2013, Vaz indicated to Parliament that it should withhold 10 per cent of his salary, approximately $15,000 each month, which should go towards providing assistance to the infirmary through the Portland Parish Council.

With just over $177,000 now saved, the council has started to provide assistance to the infirmary.

"I volunteered to take a pay cut at a time when I realise that the harsh economic climate was taking its toll on the people of Jamaica," said Vaz.

"My decision to take a voluntary pay cut resulted in some negative comments and criticism from both sides of the political divide but I did it out of love and feeling.

"When I was told that the funds had actually matured to that amount I felt good that I was able to assist this institution. I am happy to be a part of this handover and it goes to show that sometimes a little can go a far way to those that are in need," added Vaz.

He has given a commitment to the matron at the infirmary that he will continue to provide the facility with assistance.

The MP also asked the infirmary to make a list of its urgent needs, so that he can speak to donor agencies and corporate Jamaica for further support.