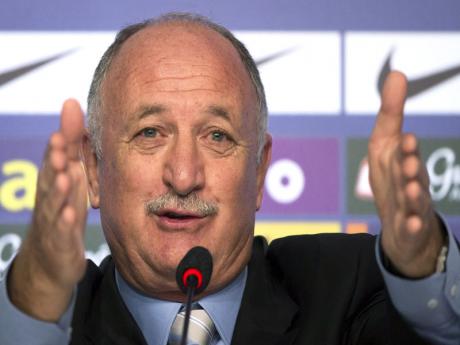 Scolari said adjustments need to be made to the squad after lacklustre performances in the warm-up matches, but he will probably keep the same line-up for the inaugural match against Croatia on Thursday in Sao Paulo.

Brazil didn't play well in a 4-0 win over Panama on Tuesday and also struggled in the 1-0 victory over Serbia on Friday, when the crowd loudly jeered the team.

The coach was annoyed when asked about the poor performance of Chelsea playmaker Oscar and rejected bowing to public pressure, saying Scolari is "the one who decides who is going to play."

Scolari has constantly said he will start the tournament with the same line-up that won last year's Confederations Cup, but questions were raised recently after a few disappointing training sessions and struggles against Panama and Serbia.

Brazil had a bad start against Panama and only improved after a free kick goal by Neymar midway through the first half. On Friday, the team was loudly jeered by the nearly 70,000 fans who packed the Morumbi Stadium.

The biggest doubt is about midfielder Oscar, who was substituted by Chelsea teammate Willian on Friday. Willian also replaced Oscar in practice when the playmaker left the squad for the birth of his daughter earlier this week.

After being asked about a possible change in the team because of Oscar's lacklustre performance against Serbia, Scolari abruptly interrupted a reporter to say he wasn't going to be affected by the opinions of outsiders. Oscar has also been dropped several times this season by Chelsea manager José Mourinho after below-par performances.

Although changes for the opener are unlikely, the coach kept the possibility open for the rest of the tournament.

Oscar admitted there were "too many people" questioning him and talking about Willian, but said he was "not bothered" by it.

"I'm not playing my best football yet, but hopefully I can show what I can do during the World Cup," Oscar said. "It's not one friendly that is going to be responsible for me losing my spot on the team."

Brazilian players were given the day off yesterday and will return to practice today.