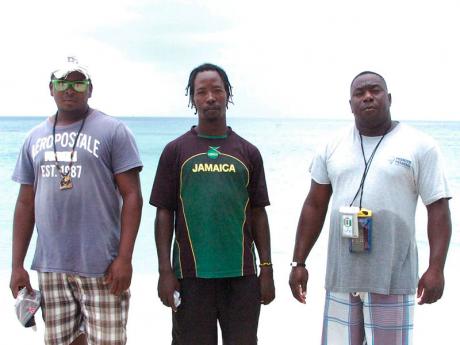 From left: Damion Muckler, Dwhite Hibbert and Kevin Curley are among the displaced jet ski operators on Negril's beach.

WESTERN BUREAU:Although the Ministry of Tourism has given the green light for personal water jet ski operations to be resumed, operators in Negril, unlike their Ocho Rios counterparts, say they are nowhere near ready to accept the new set of rules.

The operators say they are finding the cost for licensing and insuring their personal watercraft (PWC) unaffordable.

According to them, they are further disheartened because the lifting of the temporary ban on jet skis does not fully guarantee them the necessary Jamaica Tourist Board (JTB) water sports licence, which they now need to operate the craft.

"The measures that the minister (Dr Wykeham McNeill) is putting forward, cannot work as they are right now ... . Insurance alone is US$2,000, and we can only access insurance from overseas. There are a lot of bikes in Negril, and we have to be riding up and down the beach to find passengers, so it is hard for us to make that money," jet ski owner Kevin Curley told Western Focus.

"Ocho Rios is a smaller area, and there are fewer jet skis, so it is easier for them to get up and running. The minister needs to come to Negril and have a meeting with the people. I am sure if an election was imminent, we would have already seen the minister, and not only that, but jet skis would have been running all up and down Negril's beach ... . It's all about politics, and our system is very corrupt," Curley said.

In February, the Government imposed a temporary suspension of all jet ski activities across the island following mishaps that resulted in two fatalities. Prior to that, the minister had also announced a ban on the importation of jet skis into the island, which will now run up to October 15, 2014.

Reopening the door to jet ski operations, McNeill outlined a series of new measures in his recent sectoral presentation to the House of Parliament. He announced that all jet skis must now be licensed and insured in order to be eligible for a JTB water sports licence.

Additionally, PWCs must have the appropriate decals affixed or be liable for seizure by the authorities; all operators of commercial PWCs must receive training in the operation of the vessel; and all PWCs should enter and leave the shore using the designated launch area at a slow speed of three knots.

McNeill revealed that these measures were enacted based on recommendations from a specially assigned PWC Task Force, guided by the Maritime Authority of Jamaica and the Tourism Product Development Company Limited. He added that the Marine Police Division would be responsible for enforcement.

But Curley, in echoing the sentiments of other operators in Negril, lashed out at McNeill for what he called an abandonment of the operators, coupled with a refusal to meet with them.

"The people in the west are so depressed ... . We have asked him to come and talk to us several times before and he has not come. We are simply asking him to put down the costs for us and we will all come together and try to make the new system work," Curley said. "What we are seeing now is that Jamaica is no longer for the poor; Jamaica has now become a place for the rich."

Under the new regulations, the Tourist Board Act has been amended to allow fines for breaches to be increased from $20,000 to $500,000; and water sports regulations have also been amended to give "the Crown the power to dispose of water sports vessels seized" and to prohibit persons under 17 years from operating commercial jet skis without an accompanying adult.