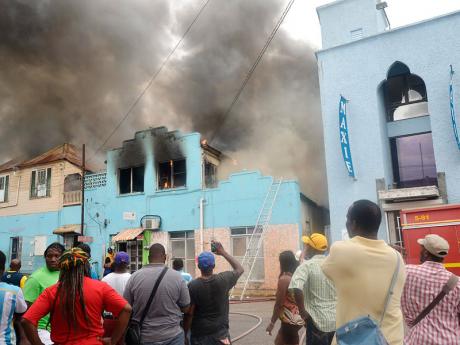 Onlookers gather at the scene of a massive fire along St James Street in Montego Bay late Sunday evening. - Photo by Courtney Locke

The Montego Bay Fire Department has indicated that several of the latest fires in the Second City are the result of arson, following two recent fires which severely damaged a number of businesses, putting them temporarily out of operation.

"We have been receiving calls from the King Street, Paradise Road and Union Street areas ... . Though we can't definitely say at this time, it is obvious that someone was lighting those buildings," Montego Bay Fire Station Deputy Superintendent Conroy Ghans told The Gleaner.

Statistics obtained by The Gleaner from the department also show that since the start of June, the station has been called out to a record eight fires, the latest one being early yesterday morning, when the Ultra Med Pharmacy, located along Union Street, was gutted.

"The call came in at 3:30 a.m. for a fire at 30 Union Street. We responded with three units from the Montego Bay Fire Station. When we got there, we found out that the fire had started at the rear of the building. Based on our preliminary investigations, we believe that the fire might have started as a result of arson," said Ghans.

In this attack, the building sustained major interior damage to its storeroom, resulting in the destruction of more than $1 million in medication.

Pharmacist Catherine Belcher acknowledged that she was very concerned and encouraged fellow business operators to be on the alert as anyone could be affected.

"I feel very disturbed. This is a major setback for us ... but this can happen to anybody, we all need to be vigilant," she said.

This latest fire follows another massive blaze which occurred at the corner of St James and North streets in downtown Montego Bay on Sunday evening, leaving a number of businesses seriously damaged. A two-storey wooden house, said to be abandoned, was also destroyed by the raging flames which took five units from the Montego Bay and Ironshore fire stations to be brought under control.

In light of the recent fires, residents are speculating that extortion could be a primary force behind those happening at business places.

"Word on the street is that the bad boys are demanding money from the business people ... . When they are not paid or they do not receive the amounts asked for, they go after those businesses by burning them down," said resident Len Smith.