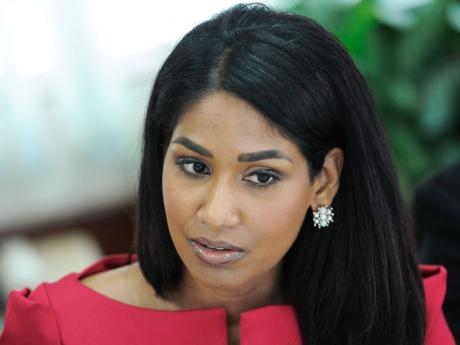 THE GOVERNMENT is rushing to obtain advice from the attorney general on what legal recourse is available to the Ministry of Youth and the Child Development Agency (CDA) against Jamaicans for Justice (JFJ) for introducing unauthorised sex-education material in six privately run children's homes.

Youth Minister Lisa Hanna, who penned a letter to Attorney General Patrick Atkinson, has also written to Children's Advocate Diahann Gordon Harrison seeking legal opinion on the actions of JFJ and the administrators of the homes, which have provoked public outcry and condemnation from various groups in the society.

The manuals used by JFJ, which contain the controversial sex-education information, have also been referred to the attorney general and children's advocate.

At the same time, the Office of the Children's

Advocate (OCA) has officially commissioned an investigation into the matter.

"In light of the heightened public interest, the OCA will provide a more detailed statement on the matter, in due course," read a terse statement from the office.

In a media release yesterday, Hanna pledged to do all in her power to ensure there is never a recurrence of such a "breach of the protection of the children in state care from inappropriate content", describing it as a "betrayal of the trust of children by those employed to look after their best interest".

Hanna has also given instructions to the CDA to immediately sharpen its monitoring functions, even as she awaits a report from the agency on the JFJ scandal.

At the same time, the CDA is said to be accessing critical information which has aided its investigation.

In the wake of The Sunday Gleaner's report, followed by a related article on Monday, revealing elements of the course that was being taught to state wards, ages 12 to 18, former JFJ Executive Director Dr Carolyn Gomes resigned as a member of the human-rights lobby's board.

Gomes negotiated and signed the Caribbean Vulnerable Communities (CVC) Coalition contract in April 2013 for the controversial programme that was introduced in the privately run children's homes.

The CVC is expected today to respond to media reports regarding its role and objectives during a press conference in Kingston.

The Jamaica Family Planning Association (FAMPLAN), which developed, published, and distributed the Jamaican Guidelines for Comprehensive Sexuality Education, has distanced itself from the inappropriate material shared with the children's homes.

"While our publications informed the curriculum developed by JFJ, the final document that emerged had substantive differences from ours," FAMPLAN noted.

"There were changes in the arrangement of content, which elicited different meanings. Content obtained from other sources was included without the citing of references to indicate source, and multimedia was added, which influenced alternative meanings in the content," FAMPLAN continued.