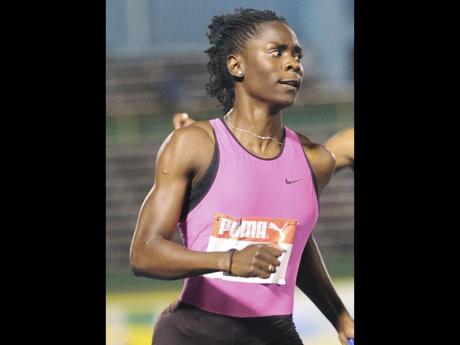 EXCEPT for Olympic and World Championships 100 metres champion, Shelly-Ann Fraser-Pryce - who will not be competing - it will be a loaded field for the women's 100 metres at this weekend's Jamaica Athletics Administrative Association (JAAA) Supreme Ventures Natio-nal Senior Championships inside the National Stadium.

The athletes are seeking selection to represent the country at next month's Commonwealth Games in Glasgow, Scotland and a top-three finish will guarantee the runners a spot for the event in Glasgow.

Two former champions in Sherone Simpson and Veronica Campbell-Brown will attract a lot of attention, as both had been out of competition for a while due to suspension.

For Simpson, it will be her first race of the season, while Campbell-Brown has been putting on some fine performances. Actually, she is the country's top athlete in the event this year following her 10.86 seconds in Clermont, Florida in early June, just inside the legal wind limit of 2.0 metres per second.

That time also places her as number two in the world, just behind Trinidad and Tobago's Michelle-Lee Ahye, who clocked 10.85 seconds over the past weekend at her country's National Championships.

For Simpson, however, she could be a bit rusty, not having not competed for nearly a year. It will take a yeoman effort for her to improve on her second-place finish a year ago.

With her fast time coming into the Championships, Campbell-Brown will start as favourite to win another national title, but could play second fiddle to defending champion Kerron Stewart.

With a season-best 11.08 seconds at the Rome Diamond League meet, where she finished second to the in-form Tori Bowie of the United States, Stewart is a class act and normally performs well at the National Stadium. She showed that a year ago when she blew away the field to win in a fast 10.96 seconds, despite not being at her best coming into the Championships. She looks set for another fine performance.

Both Stewart and Campbell-Brown could fall victims to the vastly improved Samantha Henry-Robinson, who is showing good form this season and who looked like a winner at the adidas Grand Prix Diamond League meet in New York. There, she got a great start before being caught late by Bowie. She is the second-fastest Jamaican this season - after her 11.00 seconds in Clermont, Florida, and could improve big time on her eighth-placed finish a year ago.

The likes of Simone Facey, with a season-best 11.09 seconds, along with National Collegiate Athletics Association Division One 100 metres champion Remona Burchell (with a best of 11.03 seconds), local-based runners Schillone Calvert and Carrie Russell have shown good form this season and anyone could spring a surprise.

However, once Stewart is fit, she is the one they all have to beat, as she looks set to take her second national title in a row.