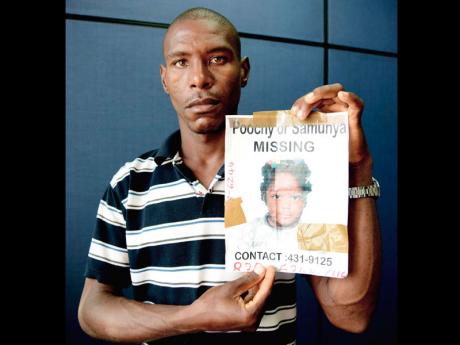 The PARENTS of the three-year old girl who vanished from their St Catherine home nearly two weeks ago yesterday made a fresh appeal for the safe return of their daughter on the eve of her birthday.

Samunya Bloomfield disappeared under mysterious circumstances just after 11 p.m. on Friday, June 20, from her Grove Farm home in Old Harbour, while asleep on the same bed as her mother and one-year old sister, Danielle.

The missing girl's parents visited The Gleaner's North Street headquarters yesterday, desperate to keep the search for their daughter alive.

Twenty-two-year-old Yanisha Brown, Samunya's mother, collapsed in The Gleaner's reception area after becoming overwhelmed with emotion. She could only whisper and wore a visibly vacant facial expression that reflected the devastating loss both her and her 29-year-old common-law husband, Kris-Nieve Bloomfield, say they are feeling.

"Tomorrow (today) is her birthday. I've just come to appeal to who has taken my child, whether you need a ransom or anything, I just need back my child by tomorrow," he explained to The Gleaner in a sad tone.

Kris-Nieve described Samunya's disappearance as a mystery and said that his daughter's abductor could not be a stranger given that he has five dogs in his yard and there were no signs of forced entry to the house's two accessible points of entry.