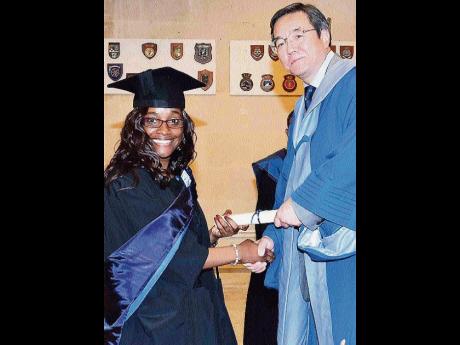 Secretary general of the IMO and chancellor of IMLI, His Excellency Koji Sekimizu, presents the award to Vannessia Stewart of the Maritime Authority of Jamaica on her graduation from IMLI. - Contributed

From a class of 33 lawyers from 25 countries, the Jamaican representative, Vannessia Stewart, was awarded the prize for Best Overall Performance at the International Maritime Law Institute (IMLI) located in Malta.

Earlier this month, legal officer of the Maritime Authority of Jamaica (MAJ), Stewart, who was a participant in IMLI's 25th Master of Laws programme also graduated with distinction.

"Pursuing the course at IMLI was a wonderful, although challenging, experience. Challenging on account of being in the presence of such imminent international maritime law experts, and arduous due to the diverse curriculum to which we were exposed. It was exciting, however, because I was part of a unique opportunity and at a special moment. Fortuitously, IMLI was celebrating its 25th anniversary and I was one of the many applicants to have been given the opportunity to be part of the institute's 'silver' year", said Stewart.

Role of the institution

The institution was established in 1988 by the International Maritime Organisation (IMO), the specialised agency of the United Nations with responsibility for regulating the safety and security of international shipping and prevention of pollution by ships, to help ensure that sufficient maritime law experts, with appropriate knowledge and skills, would be available, particularly for developing countries and Small Island Developing States.

The MAJ, as Jamaica's maritime administration, has among its roles obligations to provide for maritime safety and protection of the marine environment from potential damage caused by shipping activities in Jamaica's waters. Being party to many conventions of the IMO, the MAJ also establishes legislation to satisfy rules of the sea. The IMLI provides the opportunity for highly trained legal professionals needed to implement such legislation.

"The Maritime Authority of Jamaica congratulates Miss Stewart on her achievement. Her training will be of tremendous benefit to the organisation and to Jamaica, especially in the area of bills of lading and the liabilities surrounding the carriage of goods by sea which are critical element of the Global Logistics Hub framework", said Bertrand Smith, director of legal affairs, MAJ.