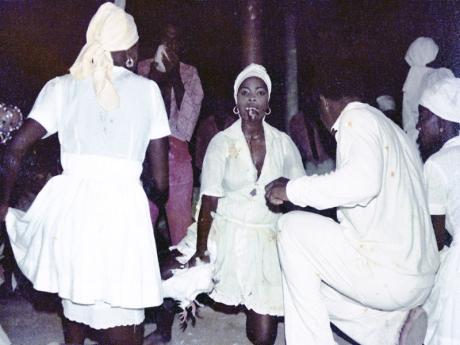 A woman with a headless chicken in a Voodoo ceremony in 1975. - File 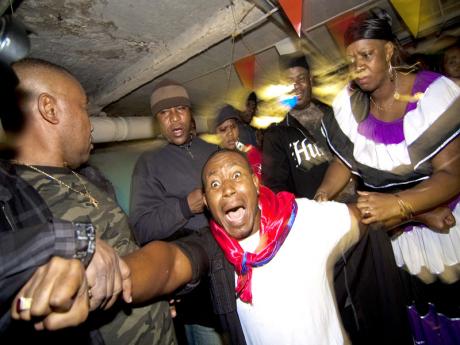 From the coastal plains of Benin to the wilting forests of Haiti, reverberating drums echo as believers sway, sometimes in uncontrollable spasms. This is Voodoo, called in academic circles, Sevis Gineh or African service.

It is a cryptic, mesmerising practice that is maligned and misunderstood. Despite its sensational and melodramatic depiction of Hollywood, and the poisonous remarks of right-wing Christian evangelist, Pat Robertson, who claimed that the practice is rooted in Satanism, Voodoo is undeniably an authentic religion with a hieratic system and its own version of soteriology (the study of religious doctrines of salvation), and cosmology.

Moreover, it adheres to a profound concept of good and evil that is second to none.

For sure, Voodoo is not magic. But today, those who uphold the letter and spirit of this tradition have a lot more to worry about than sensationalists and abrasive critics.

Regrettably, Voodoo is decaying, imploding, hijacked by a new generation of so-called practitioners that sully its image with spurious claims of occult abilities that are geared to hoodwink the unsuspecting to hand over hard-earned currency.

"Real Voodoo, as my grandparents practised it, is hardly seen today. What you have masquerading as genuine is trickery at best, and sorcery at worst," declared acclaimed Haitian media personality, Gina Faustin.

She is a successful entrepreneur in the competitive travel and tours business and her perennial television programme 'Gina's Week' is viewed religiously by tens of thousands of Haitians in New York. As scion of a legendary mambo (priestess), her roots in Voodoo run deep.

"Commercialism has eroded what is left of this beautiful religion. Young and unseasoned men are calling themselves 'hougans' or priests. The same goes for women who claim the title 'mambo'. Behind it all is greed and a perverse desire for power.

"It's a very real problem, not only here in New York, but also in Haiti. You find a lot of charlatanism because of the poverty level and people's willingness to believe," declares Faustin.

She recalls the halcyon days of the religion when it was used by vodouisants for healing and a source of counsel and guidance. "This is a family, generation-based practice that is very private".

"I am saddened and angry when I see advertisements to remove hexes and reunite lovers, presumably done in the name of Voodoo. This is misleading, dangerous and plays right into the hands of those who are already critical of our people and culture," said Faustin.

She describes Voodoo as an art, "a blessing from God to send ginen or spirits from Benin to the Haitian people. It's never about money. The ginen are there to help the family and the generations that follow. They come and speak to you of lurking danger, sickness and everything that is good."

According to Faustin: "We as African and Caribbean people were given a gift that no one else had - the power to listen and hear the wisdom of spirits as you are hearing me now".

She argues that the ginen are divorced from the Haitian people because of their spiritual improprieties, and that a spiritual boon that helped a nation gain independence and achieve so much historically has been squandered. "Everything about Voodoo is tainted."

She speaks of ceremonies where dabbling in the occult is commonplace and of her refusal to accept countless invitations.

"That's why you have to be so careful when you go to so-called spiritual workers. They may very well give you something that will destroy you and your family."

She confides that her mother instructed her that the ginen are not to be feared. "I would see mom go to the ogatoire (cabinet where spiritual paraphernalia is kept) to call on them for assistance. But this is a big responsibility ... a big one. I saw the strain it had on my mother."

Faustin, who is still able to call down the nanchon or nations of spirits, had to decide if she should carry the mantle bequeathed by her mother. "This is a decision that has to be judiciously made and involves a certain protocol. It has to be followed correctly. You must know how to discard of the ogatoire and much more".

Today, Faustin "simply talks to God," and concedes that she is satisfied and comfortable "although Voodoo remains a beautiful faith".

Lately, Faustin has seen "white people learning about the ginen". She is fascinated by the reverence they show to the traditions of Haiti.

"The spirits will help them. If these foreigners are honest and devote their time without malice and evil, they will be rewarded spiritually. Oh yes, they will."

Dr Glenville Ashby is a social critic and president of Global Interfaith Council. Feedback: glenvilleashby@gmail.com or follow him @glenvilleashby.