Lloyds bank settles with US, UK over market fixing 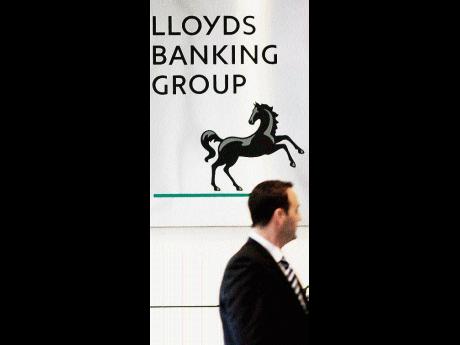 In this November 2009 file photo, a man enters the headquarter of Lloyds Banking Group in the City of London. - AP

Lloyds Banking Group is paying US$369 million to United States (US) and British authorities to settle allegations that it manipulated a key global interest rate.

Lloyds, one of the world's largest banks, on Monday became the sixth financial firm sanctioned in the international rate-rigging scandal. The US and British regulators said Lloyds attempted to manipulate, and in some cases succeeded in manipulating, the London interbank offered rate, known as LIBOR.

The LIBOR, the rate used by banks to borrow from each other, affects trillions of dollars in contracts around the world, including mortgages, bonds and consumer loans.

Under an agreement with the US Justice Department, Lloyds will be allowed to avoid criminal prosecution in exchange for admitting responsibility for misconduct and continuing to cooperate in the investigation of major banks' actions regarding LIBOR.

The $369 million that Lloyds is paying includes about $178 million levied by the UK Financial Conduct Authority, a US$86 million criminal penalty to the Justice Department and a US$105 million civil penalty to the US Commodity Futures Trading Commission (CFTC).

The misconduct by Lloyds occurred between May 2006 and 2009, according to the British and US regulators. They said traders at Lloyds rigged the estimates of borrowing costs submitted by the bank to help set the LIBOR rate, to benefit their own trading positions and those of their friends.

British banks Barclays and Royal Bank of Scotland, Switzerland's biggest bank, UBS, and Rabobank of the Netherlands have also been fined for LIBOR rigging. Nine individuals have been criminally charged by the Justice Department. The settlements with Lloyds bring the banks' total payments to date to nearly US$4 billion.

In its agreement with the CFTC, Lloyds agreed to establish controls and employee training "to ensure the integrity and reliability" of the reports submitted by the bank in the LIBOR-setting process.

Lloyds said in a statement it has "fundamentally overhauled systems and controls across the bank" over the past three years. The actions cited by the regulators "were restricted to a specific area of the business and were not known about or condoned by the senior management" of the bank at the time, Lloyds said.

The bank said it regards the actions of the individuals responsible "as totally unacceptable and unrepresentative of the cultural changes" it has made.

The process of setting the LIBOR came under scrutiny after Barclays admitted in June 2012 that it had submitted false information to keep the rate low. Barclays agreed to pay a $453 million fine, and its chief executive and chairman both resigned.

A number of US cities and municipal agencies have filed lawsuits against banks that set the LIBOR rate. They are seeking damages for losses suffered as a result of an artificially low rate. Local governments hold bonds and other investments whose value is pegged to LIBOR.

Under a change taking effect this year, the Atlanta-based company that owns the New York Stock Exchange, Intercontinental Exchange, took over supervising the setting of LIBOR from the British Bankers' Association.