Ja Combined team gets due reward 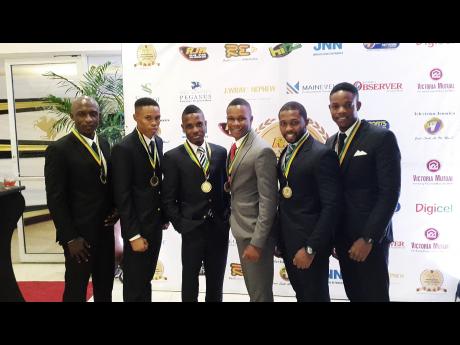 It was the first time Jamaica had ever won the prestigious title at the ITF world level, beating powerhouses Canada and Argentina, a feat which the RJR Sports Foundation was moved to recognise by honouring the team members among the country's finest athletes.

"Winning team-fighting gold at the ITF World Cup is, without doubt, the greatest ever accomplishment of the team and will probably be the hardest to replicate," McKay told The Sunday Gleaner.

The combined team holds many international martial arts accolades in team fighting, including 58 unbeaten matches achieved on almost every continent. Among the team's successes are the

"However, we had never before won an ITF world team medal. The difference with this team is that it was the first ITF world tournament Jamaica had entered as a team of combined disciplines, which is allowed in the World Cup but not at the World Championships, thus

the talent of Scott Wright

Dusard described the feeling as "awesome" being on stage the night Jamaica recognised sporting excellence.

"It's awesome. I feel honoured. I am just happy that our hard work is being recognised by the national body. The Sportsman and Sportswoman Awards Ceremony in Jamaica is almost like being the Sportsman or Sportswoman of the world.

"It's just for us to see this as the cake and go for the icing at the World Champs, a notch up from the World Cup. It's being held in Europe in May and will have a larger European contingent. To win that one will prove we are the best in the world," Dusard said.