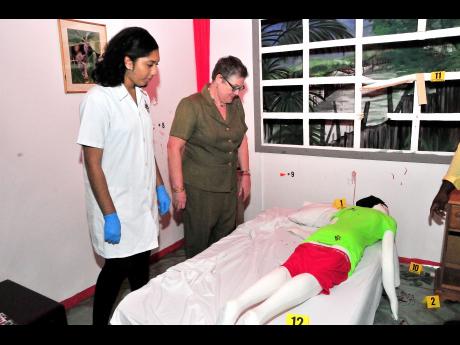 Patrick Planter
Marissa Booth (left), forensic chemistry student at the University of the West Indies, along with Professor Denise Eldemire-Shearer, chairman of the Research Days Steering Committee, examine the display, which depicts a crime investigation.

The University of the West Indies (UWI) Department of Forensic Sciences' real-life crime scene investigation, depicting forced entry through a window and subsequent rape and homicide, was, by all indications, the big pull at the Research Village on Day One of the UWI's Research Days.

The first exhibition of its kind on Research Days, scores of external and internal students, parents, and stakeholders flocked the booth to get a glimpse of the detailed portrayal.

"A crime scene like this usually takes about four hours to process. There are usually about four crime-scene examiners. Then you can have a whole team of around 12 external investigators and lab technicians as well. So it can incorporate upwards of 20 persons," 43-year-old Gregory Williams, course coordinator for Crime Scene Management and Reconstruction at the UWI, told The Gleaner.

He added: "This depicts the rape and slaying of a 20-year-old forensic science student who, possibly, had a drug problem. She was shot once in the head and once in the upper back. The team of investigators will now come in and examine all the evidence left at the scene (spent shells casings, the broken glass, hammer used to break the window, used condoms, and blood splatter) in an attempt to recreate the sequence of events and gather leads."

Williams is the head of the Forensic Sciences Department at the Royal Police Force of Antigua and Barbuda (RPFAB).

He was recruited in 2013 by the UWI's Professor Wayne McLaughlin, deputy dean at the Department of Basic Medical Sciences, to strengthen the forensics programme. Williams was given four years' time off by the RPFAB.

"The field is interesting and always exciting. There are areas such as cyber forensics, forensic toxicology, forensic pathology, etc. For this particular crime scene, my role as a forensic chemistry student would entail the testing of the broken glass fragments, drug testing, gunshot residue ... taking the empty bullet casings to the lab, putting them under the microscope and looking at certain unique characteristics such as retrace marks to determine the type of gun they would have been ejected from."

UWI, PSOJ research partnership a catalyst for nation building
Robotics group in it to win it