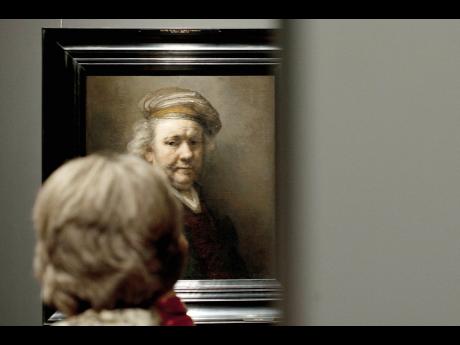 AP
A woman admires paintings during a press preview of an exhibition called "Dutch Self-Portraits - Selfies of the Golden Age", at the Mauritshuis museum in The Hague, Wednesday Oct. 7, 2015. (AP Photo/Mike Corder) 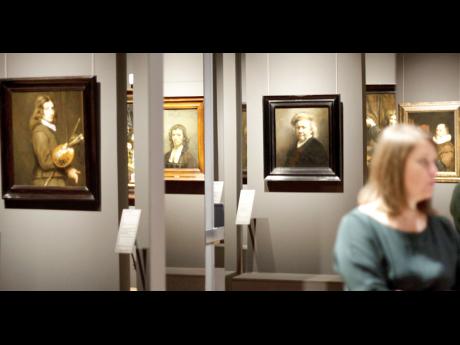 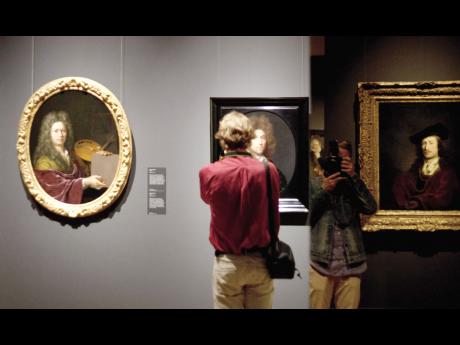 AP
People look at paintings during a press preview of an exhibition called "Dutch Self-Portraits - Selfies of the Golden Age", at the Mauritshuis museum in The Hague, Wednesday Oct. 7, 2015. These days, anybody with a smartphone can snap a selfie in a split second. Back in the Golden Age of Dutch painting, they were called self-portraits and were the preserve of trained artists who thought long and hard about every aspect of such a painting. Now the museum is staging an exhibition focusing solely on these 17th Century self-portraits that highlights the similarities but also the significant differences between modern-day snapshots and historic works of art. (AP Photo/Mike Corder)
1
2
3

These days, anybody with a smartphone can snap a selfie in a split second. Back in the Dutch Golden Age, they were called self-portraits and were the preserve of highly trained artists who thought long and hard about every aspect of the painting. Now the Mauritshuis museum is staging an exhibition focusing solely on these 17th century self-portraits, highlighting the similarities and the differences between modern-day snapshots and historic works of art. The museum's director, Emilie Gordenker, said last Wednesday there has never been such an exhibition of Golden Age Dutch self-portraits before and her museum was keen to tie the paintings to a modern-day phenomenon - the ubiquitous selfies captured with smartphone cameras and spread via social media.

The exhibition which opened on Thursday and runs through January 3 features 27 self-portraits by artists ranging from Rembrandt van Rijn, a master of the genre, to his student Carel Fabritius - best known for 'The Goldfinch', which hangs elsewhere in the Mauritshuis - and Judith Leyster, whose self-portrait is on loan from the National Gallery of Art in Washington, DC.

A less well-known artist, Huygh Pietersz Voskuyl, is the poster boy for the exhibition. His striking 1638 self-portrait features a classic selfie pose; staring over his right shoulder out of the frame. It does not take much imagination to picture him gazing into the lens of a smartphone rather than a mirror - which Golden Age artists used to capture their images for self-portraits. Giant mirrors are spread through the exhibition space, creating reflections within reflections of paintings that are themselves mirror images. While the similarities between selfies and self-portraits are obvious - the subject matter is the person creating the image - the differences are also apparent.

A selfie is often shot speedily with little concern for composition, while these self-portraits are carefully conceived works of art. A video made for the exhibition highlights the thought that went into the paintings and what today's selfie makers can learn from it to improve their snapshots. And, yes, you are allowed to take selfies in the museum. The Voskuyl is a good example of the richness that can be found in such an apparently simple picture.

"He brings out all these little details, like his beard or the little embroidery on his shirt, even a kind of fake wood-paneled wall behind him," Gordenker said. "So he's thought very hard about the textures and the things that make him who he is. At the same time, you can see the skill with which he painted this and this will have definitely been a very good advertisement for what he could do."

That kind of attention to detail and quality made the self-portraits almost a Golden Age calling card - showcasing the artist and his or her talents to potential clients. "A lot of artists in the 17th century painted self-portraits, not only as portraits of themselves but also as an example of the beautiful art that they could make," said the exhibition's curator Ariane van Suchtelen. "For instance, Rembrandt was very famous for his very virtuoso sketchy way of painting. If you would buy a self-portrait by Rembrandt, you would not only have a portrait of this famous artist but also an example of what he could do, what he was famous for - his art."