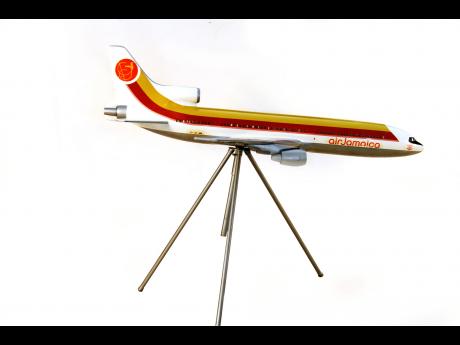 Who doesn't remember the flying hummingbird? Air Jamaica was more than an airline. it was an icon, something every Jamaican could relate to, and till date many of us would have fond memories of flying or even seeing an Air J aircraft take off or land at the airport.

This a tribute to this glorious bird that soared the skies.

This model aircraft was modelled after the Air Jamaica Love Bird (Lockheed L-1011 TriStar, 1968-1984) and was donated to the Institute of Jamaica in 1999.

It was constructed from wood and is Jamaican made. The model of the wide-body Air Jamaica Tri-Star shows the emblematic Love Bird design, which identified the national carrier for over twenty years.

The airline and its fleet became an important symbol of national pride, identity, and independence, both at home and overseas, because the establishment of a national airline in 1963 was a major accomplishment for Jamaica even after a year of independence.

Although managed by BOAC and BWIA, the airline was a Jamaican enterprise with Jamaican markings and identification. This model aircraft is an emblem that represents the end of British dominion in the island. To further detach herself from Britain, the Government severed ties with BOAC and BWIA, forming a new national airline, Air Jamaica, in 1968.

On May 1, 1966, Air Jamaica, the national airline, started flying its first two routes between the island and the United States of America.