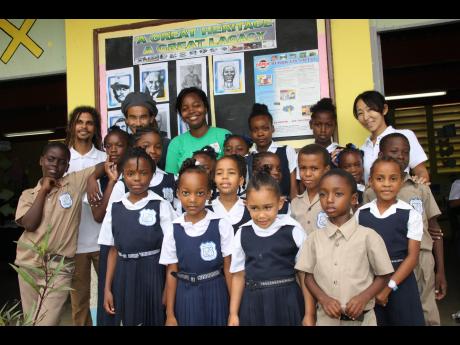 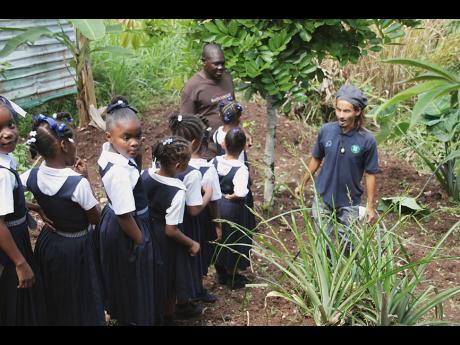 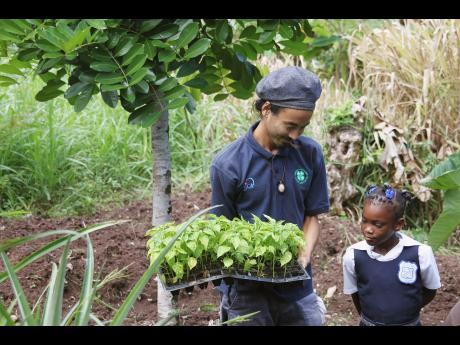 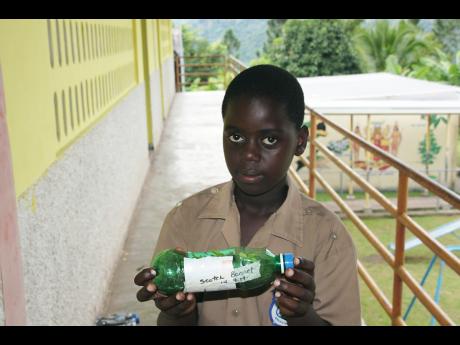 Amitabh Sharma
Dellion Meickle John, grade 5, of the Shirley Castle Primary School, Portland, is in charge of planting and caring for saplings and the compost for the school’s kitchen garden. 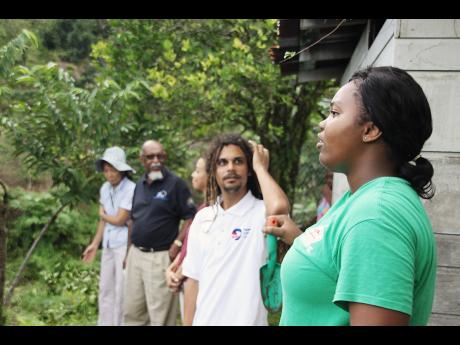 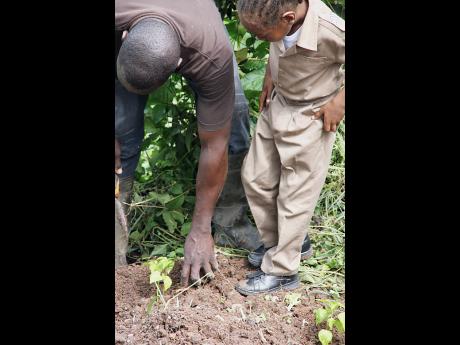 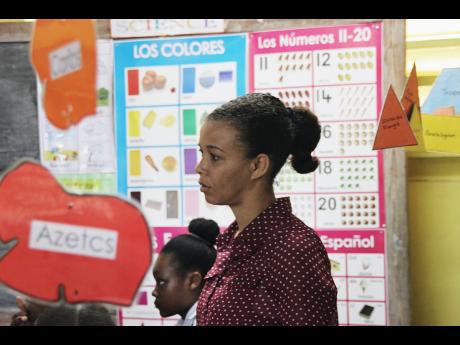 A group of students lined up, glitter in their eyes, itching to move forward and be the first ones to get in the front. This was not a line to grab their favourite treat here, rather, the excitement was all about getting a sapling to plant in their school's kitchen garden.

The journey to learn about food security, growing what you eat, and appreciating nature is taking root literally and figuratively at the Shirley Castle Primary School in Portland.

Perched on the summit, in the hills surrounded by coffee farms, Shirley Castle Primary is as off the beaten path as the pristine cool air, which one could infuse in romanticially by describing as 'kissed by the fluffy clouds' or 'bubbly like champagne'. There is one taxi that plies between the school, servicing the communities in the vicinity to Hope Bay, the nearest township.

The school is romancing with farming, with students getting their hands caked in soil and reaping rewards of their work with a little help from their friends.

Aika Nakakomi and Teppei Sato, JICA (Japan International Cooperation Agency) volunteers assigned to Portland 4-H Clubs, and Stephen Crimarco, a volunteer with the Peace Corps, have converged their energies to teach students environmental education and educate them in developing the knowledge, skill, and art of agriculture.

"This is a community effort," said Debbie-Ann Mann-McKenzie, principal of the Shirley Castle Primary School. "We have parents, and the farmers from the surrounding communities come and assist the children with their kitchen garden and teach them techniques to take care of the plants."

The initiative, which was implemented last year, has evolved into a sustainable, self-reliant, and self-sustaining project one that has converged expertise and skillsets from across the globe.

"Stephen, a Peace Corps volunteer, and I met at Portland 4-H Clubs office where I am assigned to work as environmental educator," said Sato. "We have common interests and share knowledge such as compost, which is my speciality."

These young volunteers are bringing agriculture and environmental education best practices to the table, and the key, they say, is to sustain the project with the help of the community at large.

"Coffee farms are right in front of us and agriculture plays a crucial role in order to sustain the community," Sato said as he handed out sapling, to the students to be planted. they were being guided by Lennocks Prince, a farmer from the neighbouring community.

There is more to agriculture than getting hands dirty which, unfortunately, has deterred many youngsters from going into this profession choosing the white- and blue-collar jobs over reaping profits from their backyards.

"You can develop processes. look at how technology can be used with agriculture, if you don't want to dig the soil," said Francine Constantine, an intern at Portland 4-H Clubs and student of the College of Agricultural Science and Education, to the students as she scooped out soil for them to plant the saplings.

The school is nurturing an eco-system. Nakakomi, who is from Hiroshima prefecture in Japan, is teaching methodologies about vegetable cultivation, how to establish and encourage growth vegetable gardens and to promote container gardens.

Sato, on the other hand, is focusing on recycling. he has initiated the use of plastic bottles as "seed trays".

"We believe some students realise there are a lot of materials that we can still reuse and recycle them and reduce the amount of waste that keeps feeding the dump sites," Sato, who studied ecological restoration at the University of Washington, said.

Dellion Meickle John, a grade five student is incharge of the seed trays and making compost for the plants.

"I like to see the plants grow," John said.

Last year the school planted pak choi, sweet pepper, cabbage, cucumber and tomato at the farm as well as some herbs in two raised beds that students made with plastic bottles.

"The students were a part of the process - sowing seeds, watering the plants, reaping, and eating them - while they were learning from sessions that Stephen and I taught," Sato said. "Then," he continued, "we heard a story of the student telling the teacher that he enjoyed his lunch even though he had not been willing to eat pak choi."

The leftover food is put into making compost.

"We hope that the students recognise the importance of agriculture. such efforts, one community at a time, will make them self-sustained and help cut the food-importation bill," said Crimarco.

This year, the school is planting pak choi, sweet pepper, callaloo and sorrel as well as lettuce in 1.5litre water bottles.

Students of Shirley Castle are sowing seeds to a minigreen revolution and reaping the bounties of mother nature.

These little hands, in the words of Mahatma Gandhi, are involved in "an ounce of practise, which is worth more than tons of preaching". ... and they are developing a love for their greens along the way.