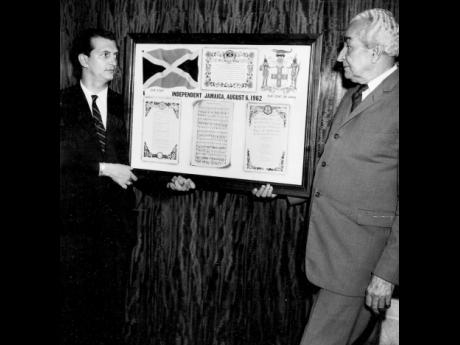 The General Election held in April 1962 was won by Sir Alexander Bustamante’s Jamaica Labour Party (JLP). The new premier, aged 78, appointed his Cabinet, which would prepare Jamaica for Independence and lead the country through its first years as an Independent nation.

This was a relatively youthful Cabinet and quite inexperienced as only a few had previous experience in the House of Representatives and in Government. The hope was that they would work well together, bring new ideas, a fresh approach to politics and development, and that the people’s confidence in them would not be misplaced.

The Independence Cabinet was as follows:

Some of these men would have long political careers and go on to become household names during their service. Assessments of the 1960s show that they had some positive achievements and made a mark in the international arena while facing challenges at home. Donald Sangster, Hugh Shearer, and Edward Seaga would become leaders of the JLP and prime ministers of Jamaica. A few would die at a very early age not achieving their full potential.

Tragedy first struck the party and Government when in October 1964, at a Cabinet retreat in Montego Bay, Minister of Communications and Works Kenneth (Ken) Jones, aged 40, died after falling from the hotel balcony. He was serving his first term as a member of parliament and in the Cabinet.

Donald Burns Sangster, born in St Elizabeth in 1911, became acting prime minister. He succeeded Sir Alexander as prime minister of Jamaica. His tenure was short as becoming ill in March 1967, he died on April 11, aged 56. This was a shock to the nation.

The JLP was re-elected in 1967. The first years in office for the Independence Cabinet had certainly come with their highs and lows.