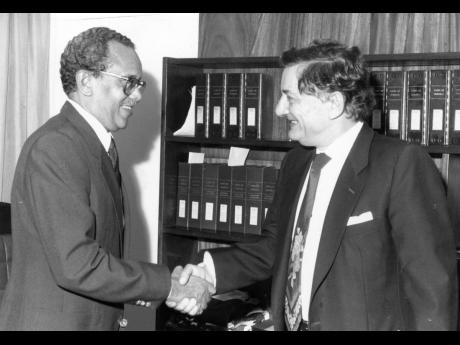 Gleaner Archives
In this 1987 photo Don Brice, permanent secretary in the Office of the Prime Minister (left) greets Dr. Antonio Pasquali, assistant director general and regional co-ordinator for Latin America and the Caribbean for UNESCO.

As said many times, as a small, developing island state, international trade, both imports and exports, is very important in Jamaica’s economic development. Jamaica, becoming an independent nation, supported the concept that trade and development were linked and emphasised the need to expand exports, which meant improving production in agriculture and manufacturing, developing the mining sector, securing traditional markets, and seeking new ones.

Jamaica was then joining and actively participating in the international trade organisations, the General Agreement on Tariffs and Trade (GATT), and the newly created United Nations Conference on Trade and Development (UNCTAD). At the regional level, Jamaica was involved in creating the Caribbean Free Trade Association (CARIFTA) and the Caribbean Community and Common Market (CARICOM).

A civil servant involved in the formulation and execution of Jamaica’s foreign trade policy, in these early years of independence, passed earlier this month. This was Donald Courtney StJohn Brice, 1930-2022. He was 92 years old.

Donald (Don) Brice was born in Kingston on April 7, 1930, to Silvion St.John Brice, a wharf manager (a wharfinger) with the United Fruit Company, and his wife, Mary Valerie Sanguinetti. The family then lived on East Street. Don Brice attended Wolmer’s Boys’ School, the University College of the West Indies, Oxford University, and the International Management Institute in Geneva, Switzerland. He entered the Jamaican civil service in 1949. In 1957, he transferred to the Ministry of Trade and Industry as an administrative cadet. In May, he married Gloria Patricia McLean. They had one daughter.

In 1962, under the new Ministry of External Affairs, he was assigned to the newly established Jamaican High Commission in London as first secretary and later was appointed commercial counsellor. Britain was an important trading partner. Being reassigned to Kingston, he returned to the Ministry of Trade and Industry in 1967. He was in charge of the Foreign Trade Division, and in 1973, was appointed permanent secretary.

By 1977, the Foreign Trade Division was transferred to the Ministry of Foreign Affairs as Percival James Patterson was appointed minister of foreign affairs and foreign trade. Don Brice was then permanent secretary responsible for foreign trade, along with E. Frank Francis, who was permanent secretary responsible for foreign affairs.

Don Brice moved on to be permanent secretary in tourism and in the Office of the Prime Minister up to 1990. Thereafter, he was involved in the work of the West India Commission, the establishment of the Association of Caribbean States, and served on various councils, commissions, and committees at the UWI. In 1993, he was appointed ambassador and special envoy at the Ministry of Foreign Affairs and Foreign Trade.

Ambassador Don Brice gave long and distinguished service in the Jamaican civil service and Foreign Service. He also served the region, and before finally retiring, worked on diaspora-related matters. MrsPhyllis Berry was his faithful and very efficient personal assistant. It seemed like he never moved to a senior post in the domestic civil service without Mrs Berry.

Donald Brice was awarded the Order of Jamaica.

He always said that he wanted to write a book, and it is regrettable that he did not realise this dream. His wealth of experience and knowledge may have now gone with him. Hopefully, his papers can be donated to the University of the West Indies.