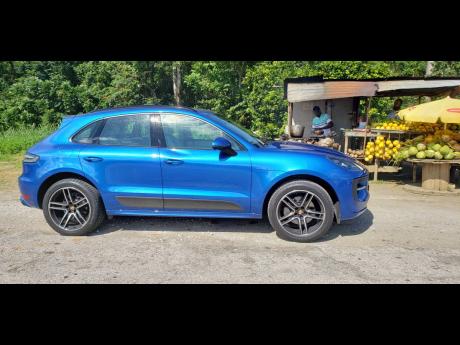 Recently, I have been doing a lot of reviews on compact crossover SUVs due to the interest they have been receiving in our market. Size-wise, they fit into most spots around town, and because they are smaller than mid-size SUVs, they are usually more fuel-efficient.

A year ago, I reviewed the Porsche Cayenne, which was a monster on the road, as well as eye candy for commuters. The acceleration was instantaneous and aggressive, to the point where I felt offended whenever anyone overtook me. I remember being on the South Coast Highway and a pickup van passing me. I quickly returned the favour and stared him down, just as a gesture for him to remember his place.

Now, I am doing the Cayenne’s younger brother, the Macan, which churns out 248hp effortlessly. To be clear, this is a luxury compact SUV, and it has the price tag as proof. In our market, it directly competes with the Range Rover Evoque and Mercedes GLA.

For this reason, buyers usually want a premium design and feel. First, the silhouette of the vehicle is unmistakably Porsche as it shares a striking resemblance to the Cayenne. The nostril looks aggressive with air vents that wrap around the front bumper. The theme continues up top with the clamshell bonnet that has two holes to accommodate the headlights.

These tinted LED lights include the Porsche Dynamic Lighting system, which uses cameras and sensors to independently control the multiple headlight bulbs. For example, if you are going around a corner, there is Static Cornering Light, which has a ‘curving effect’ when the steering wheel is turned.

From a side view, the 20-inch jet-black metallic rims anchor the sporty look, and it is obvious that the contours were built for aerodynamics. The apex of the roof comes between the ‘A’ and ‘B’ pillars, then it slightly tapers to the trunk, but not in a coupe style that eats into the headline of the rear-seat passengers. As for the trunk, there is a slight protrusion that helps it to accomplish a cargo space of 500 litres. .

AN INTERIOR IN KEEPING WITH TRADITION

Whenever I open a Porsche door, the first thing that always stands out is the centre console, which has two columns filled with buttons. At first, it can be a bit intimidating as there is a switch for everything from suspension adjustment to the stiffness of the steering. It’s definitely the most personalisable vehicle I have ever driven. The drawback is that there is a learning curve that every driver must go through. Porsche wants owners to go through a unique experience, and this is the trade-off.

The two-tone interior looks great as a combination of Agate Grey and Pebble Grey is used to give the vehicle a pristine look.

The exposed stitching also gives it a sense of class and distinction. It’s as though the brand was paying homage to its past with a style that harks back to the ‘60s.

Embedded in the headrest is the Porsche insignia, which is also on the steering wheel.

To ensure that the driver finds a comfortable seating position, there are 14-way adjustable seats, which means that whether you are tall, short, fat, or skinny, there is an ideal position for you.

It has good driver visibility up front, especially with the side mirrors being placed on the door rather than the crevices of the window. This also helps the vehicle to feel more spacious than it really is, most notably when the panoramic sunroof is exposed. Where space is concerned, there is ample headroom for both front and rear passengers.

The two-litre turbo engine is no slouch, quite the opposite. With vehicles like these, I have to remember to temper my acceleration foot. I decided to take it out to St Ann to test the suspension and handling around Colgate corners. The wishbone suspensions handled the potholes well, even in Sport mode.

Keep in mind that the electrically assisted steering makes the vehicle super sensitive.

Other standout features were the Porsche Traction Management and the active all-wheel-drive system. These come in very handy when going around corners at high speeds; there is no body roll. Even though it is an SUV, it handles like a sports car.

The seven-speed transmission is paired with a dual-clutch system, which has been tuned to offer quicker shifts.

Even though it’s not a vehicle that most persons will be taking offroad, the option does exist. It has a normal ground clearance of 190mm; however, the air suspension can be adjusted to increase the distance to 230mm. This will ensure that all the water-sensitive parts are 300mm from the ground.