Dean Corrodus: On the track of Jamaican motor sport 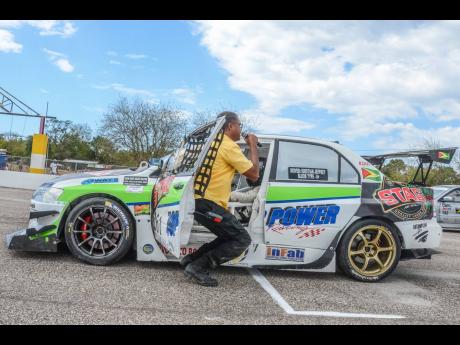 The vast world of motor sport in Jamaica has continuously proven to be a vibrant, and perhaps partly underappreciated, segment of our culture. Regardless, the sport is always a source of excitement and varying levels of success and accomplishment for all the stakeholders involved. Both on and off the track, motor sport appears to be consistently active and exhilarating. As a promoter, organiser, and former competitor in the racing world, this week’s Automotives feature, Dean Corrodus, provided us with some insight into his experiences in racing, as well as into the inner workings of motor sport in Jamaica.

Corrodus was introduced to racing in childhood, when he would attend dirt-track autocross races at Montego Freeport (hosted by the Montego Bay Motoring Club) with his father. “Seeing the race cars sliding sideways with dirt being thrown out from under the tyres got me hooked,” revealed Corrodus. The vivid visual impact of the racing seems to be what caught Corrodus’s attention, and it later translated into his participation in dexterity, sprint, rally, circuit, and even some informal drag racing in the early part of his career. Rally was, unsurprisingly, his favourite genres.

“[I liked] specifically tarmac rallies, where one is afforded the opportunity to race on closed public roads. The fact that one can drive at high speeds in such a controlled environment and use all the road, where normally, speed limits are enforced, was fascinating to me,” he said. The highlight of Corrodus’s career, though, actually came in racing at the Ironshore tarmac sprint track in 2014 – an event that happened to be held right in the racer’s front yard. Simply racing at Dover also proved to be a highlight for someone who used to avidly speculate about the infamous Dover events as a youngster.

Starting with the simple things

Naturally, one might wonder why a competitor would leave the guaranteed excitement and adrenaline of something like a Dover track to participate in the behind-the-scenes efforts of promoting and organising. Well, it turns out that Corrodus started in the arena of promotion/organising back in 1995 before he even met the track.

“A friend of mine, Douglas Gore, encouraged me to be a part of the newly formed Team Mobay Racing. As I was the only one at the time who didn’t own a race car, I saw that my greatest contribution to the team would be to plan and run the races so that all the other team members could have the opportunity to compete and enjoy themselves,” he said. Corrodus himself admitted that working at a race meet was probably one of the least desired tasks in motor sport. “Everyone wanted to be in the limelight driving and having fun, rather than doing mundane tasks such as running security at the gate or serving food and beverages in the restaurant or bar,” he said. Eventually, Corrodus would get his own taste of the track in the 2000s, and he fully return to organising and promoting post-2016.

This is where we get a bit of a look behind more than just the engines in motor sport. As a promoter and organiser, Corrodus is in charge of planning and executing a series of championship events for patrons to attend each year. He also helps to determine a national or regional champion in a particular discipline of motor sport, chooses event dates, and secures venues and permits from governing and sanctioning bodies, among other things.

“I always refer to what Usain Bolt said in an interview when asked if at big races, he is ever daunted by the size of the stage or the competition. He answered that his job was simply to execute what he had been doing in training. The same is true on or off the racetrack,” he said. Corrodus further explained that the “thrill and reward” from racing and from organising were virtually the same for him as the nature of planning, research, and preparation is, ultimately, very similar in the two disciplines. “The goal is the same, whether competing on the track as a racer or competing for the entertainment dollar of attendees, whether those attendees are in the stands, in the competition, or are seeking commercial mileage from their involvement. Training and planning and a simple execution of those two ultimately result in success,” he said.

In addition to this relatively surprising insight, the organiser also shone some light on some of the key aspects that are actually valuable for the promotion and continued growth of racing in Jamaica. “The engagement and education of primary- and secondary-age youth in the career opportunities that exist in the automotive industry is tremendous. They can become engineers, drivers, mechanics, technicians, sales personnel, marketing and advertising professionals,” he said.

On the same note, Corrodus informed Automotives that “the continued development of facilities, programmes, and schools/training for the development of the huge talent pool that exists in Jamaica is the ongoing commitment”. In support of this goal, the organiser, promoter, and former racer will be offering himself as chairman and managing director of the Jamaica Race Drivers Club with a specific intention to develop dexterities, karting, and drag racing, the three traditional and most accessible avenues to participation in motor sport. The national championship series in all three will be coordinated with the aim of increasing the numbers participating at the entry level and thus gradually increasing the participation numbers at other advanced levels of the sport.