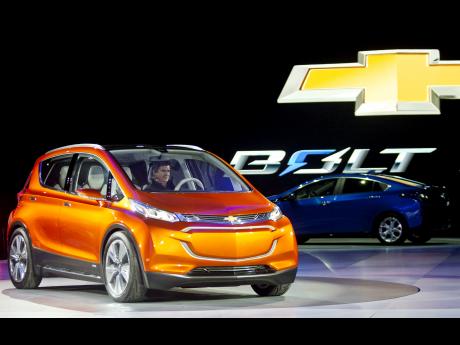 General Motors plans to cut US$5.5 billion in manufacturing, purchasing and administrative costs during the next three years, helping to finance a big push into autonomous cars and car- and ride-sharing services.

The company told Wall Street analysts Thursday that the savings in logistics, manufacturing, information technology and other costs will more than offset increased investments in brand development and new technology.

GM says it will start testing a fleet of self-driving Chevrolet Volt plug-in hybrid cars late next year at its giant technical centre campus north of Detroit. It also announced two car- and ride-sharing services that it expects to generate added profits. The test Volts will be summoned by employees with a smartphone app.

The company also has a car-sharing program that allows residents of a 479-home luxury apartment building in New York City to reserve SUVs and park them in any of 200 garages in Manhattan. It also plans to launch a car-sharing service in an unidentified US city early next year.

Product Development chief Mark Reuss said the autonomous car tests aren't being announced just to get media attention. "We're not doing this as a publicity stunt," he said.

The self-driving car experiment is an effort by GM to match Google, which has a fleet 48 robot cars that have logged more than two million miles on private tracks, highways and city streets near the company's Mountain View, California, headquarters. Apple also is testing its own autonomous vehicles, and Uber has created a lab in Pittsburgh to develop them.

GM President Dan Ammann told analysts that the personal car ownership model will remain in place for "quite some time." But GM is experimenting with autonomous cars "so we're right there every step of the way," once that model changes.

No company in or out of the auto industry has solved all the technical obstacles to autonomous cars, nor can they claim leadership, Reuss said. GM sees an opportunity to lead as it works with partners to develop better sensor technology that can handle heavy fog or ice patches, artificial intelligence that can predict driver behaviour and prepare for real-world problems and precision mapping to guide the cars, he said.

"We have already developed a lot of this enabling technology because we saw this coming," Reuss told the analysts.

GM also announced that it would be the first in the auto industry next year when it reveals technology to weld aluminium to steel. That will help GM further reduce weight in its vehicles.
The company also predicted a 31 per cent reduction in battery costs for electric cars that could speed price reductions. Currently its battery cost per kilowatt hour is US$145, but that will drop to US$100 by 2018, a reduction that could make the cars more competitive with internal combustion engines.

GM now sells the Chevrolet Volt, which can go about 40 miles on battery power before a gasolene generator kicks in. It also has promised to roll out the Chevrolet Bolt, a US$40,000 fully electric car with a 200-mile range, in late 2016.

The company also said during its annual investor presentation that global growth initiatives will increase earnings per share to US$5 to US$5.50 next year. GM projects full-year earnings this year of US$4.50 per share this year, up from US$4.12 in 2014.

Pretax profit margins, the percentage of revenue that GM gets to keep, will grow to 9 to 10 per cent by early next decade, the company said. Currently they're at 6.8 per cent.
In China, GM expects total sales to slow to a 3 to 5 per cent annual growth rate between now and 2020. The market had being growing at a 17 per cent annual rate from 2008 through 2014. The company predicts that global auto sales will rise substantially from 85 million this year to 130 million by 2030.

Reuss said the company expects to cut US$2 billion in material costs alone by 2018 as it reduces weight in all its vehicles.

Barra said it's too early to gauge the impact of Volkswagen's diesel emissions cheating scandal on government pollution regulations worldwide, but she said GM plans no changes. "We have a lot of confidence in our diesel technology," she said.

Volkswagen has admitted installing software on 11 million cars with four-cylinder diesel engines worldwide that turns on pollution controls during government tests and turns them off on real roads.