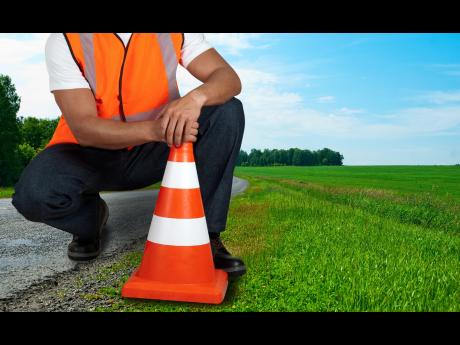 The repeated repair of that short piece of road that is susceptible to sinkholes at the top of East King's House Road in the vicinity of Loshusan supermarket, is a harbinger of our Government's inability to execute properly and perverse penchant to waste taxpayers' money.

My recollection is that the first major repair to that stretch of road was completed sometime in 2013 or late 2012. During most of the second quarter of 2014 - maybe even part of the first quarter - government agencies and officials who manage water and sewage messed up the relatively new road and disrupted traffic for months. That corner is a very tight motor vehicle space with traffic feeding into it from as many as four directions.

Those repairs were completed about the end of June last year. Why couldn't the water and sewage people coordinate their changes with the road repair folks and save commuters the hassle, and taxpayers a considerable sum? That thoughtless and uncoordinated expenditure proved to be even higher when, a few months later, a huge crater developed in the centre of the road just before reaching the supermarket, travelling from the King's House end of the road. That took months to fix and one often wondered if anyone from the relevant ministry ever travelled on that road during that period. As a commuter, and I suspect many others too, I thought all those heavy trucks that were allowed to drive over that sinkhole filled with marl would have compressed the gravel sufficiently over the months to make the engineers work easy.

Regrettably, I was too optimistic, and the engineers seem to have shared too much of my optimism and shortchanged us with the engineering ingredient for which they were paid. It became clear that the fixing arrangements for the first sinkhole was under-engineered because, in the last week or so, two sinkholes, not one, have reappeared in this same spot in the road.

I certainly hope the National Works Agency will be holding the contractor's nose to the wheel and have the firm fix these two new sinkholes, without any additional payment for the work.

But then again, I may just be forgetting that this is election time and the party in power, the PNP, has a record of managing state funds badly with their favourite contractors. The recently announced Cabinet-approved fence-building contract at Heroes' park to the PNP's all-time favourite contractor is a current and controversial case in point. The timing is impeccable in terms of the elections, and bets are being taken that full payment will be made to this favourite contractor before the election cycle is through. Like most residents in the Junction to Malvern districts of southeast St Elizabeth, I am very pleased for the work that many residents in the area have secured from the BMR Energy investors, who are constructing the wind mills in the Malvern community. Unfortunately, the work that has been done to broaden certain close corners in the roadways is a disservice to the existing roads and is far from acceptable.

Again, one has to wonder why our Government would agree to such shoddy work from either the investor - if they are the ones that were responsible for this roadwork - or its works agency, with such abject disregard for road users, who are almost exclusively Jamaican citizens and taxpayers.

Substantial pieces of ground adjoining the existing roadways have been carved out, and some marl thrown on the ground with a little heavy oil poured on top to keep the gravel together for a while. In some instances, not even heavy oil is used to cover the gravel. Why couldn't the new broadened areas of the road be covered properly with acceptable tarmac? Why do we have to do things in this 'chaka chaka' fashion when, for a little more cash, these new road extensions could be done well and thereby serve us well for a really long time.

It is quite certain that a few showers of heavy rain will dig out the newly carved-out, unpaved-sections of the road. Indeed, in driving pass many of the carved-out areas of this roadway over the past weekend, I noticed that some of the existing paved roadways are being eaten away by water where they meet the new improperly paved roadways.

Many who doubt the current Government's commitment to good governance and the securing of value for money for Jamaican taxpayers, suggest that government supervisors allow this kind of poor quality work to be accepted and paid for so that their contractor friends - or even family members - can get more work in a short period of time.

There is a strong inference that corruption is a large ingredient in the process of how these contracts are awarded.

I value and applaud the development of the north coast highways that will soon link Kingston to Negril via Ocho Rios. A lot of cash and IOUs on the backs of Jamaican taxpayers have been used to invest in these long-term beneficial transportation arteries. It is now time for a similar investment strategy be put in place for this long-overdue south coast highway.

South coast touristic developments have taken a different tack from those large multipurpose hotels which populate the north coast. Investments in tourism, agro-processing, farming, trading, housing and educational facilities destinations on the south coast would be encouraged significantly if a modern highway was to traverse the countryside. Let it be built outside May Pen where the current highway ends, to Negril to meet the north coast highway.

How I wish suitable Jamaican contractors would be engaged for such a project. Alas, however, we may have to turn to the Chinese again because of their work ethic and money.