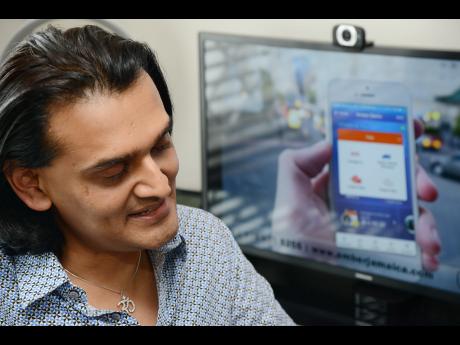 Rudolph Brown
Amber Connect CEO Dushyant Savadia is beside a computer screen depicting a demo of the Amber tracker service.

Amber Connect, a start-up provider of vehicle-tracking systems, has scored 700 Jamaican clients since January when it went on the market, more than a quarter of whom have bought the fleet-management service.

CEO and founder Dushyant Savadia also claims markets in the United Kingdom, Trinidad & Tobago and St Maarten, with around 4,000 devices distributed overseas, and that distribution deals are in the works for Canada, the United States, Puerto Rico, Spain and Aruba. The roll-out is projected for July.

The Amber tracking devices are produced in Hong Kong for Amber Connect, which owns the technology. Software development is done in Jamaica and India.

One Jamaican client, Christopher Nakash of Nakash Construction, who signed up three months ago, has given the service top rating.

"I tried it out on a couple units and it worked very well, and now I've put it in my whole fleet and even my families' vehicles," Nakash said, relating several real-life experiences since installation.

"Just the other day, I got a call from my dad. He was concerned that he could not get my mom since she'd been away past her usual time. I was able to go into the system and assure him that she was just two minutes away coming up the road," he said.

Savadia says he has sold 200 subscriptions to Amber Fleet in Jamaica. The management system allows in-depth analysis of fuel consumption; driver behaviours, such as harsh braking, sudden acceleration and speeding; off-routing and driving times; as well as vehicle security monitoring, including engine onoff notifications, and anti-theft and collision alerts, he said.

That was confirmed by Nakash, who has a fleet of 14 vehicles a mix of company and private units.

"Some of my employees have been known to have a heavy foot when it comes to the gas pedal and so I just set parameters for the speed. I get a notification if any of them is speeding, and if they are only supposed to be working in a certain area I will immediately know if they go outside of that, going 'on a roast' or off-route," Nakash said.

Amber Connect has forged an alliance with some insurance companies where clients get a 10 per cent discount on premiums with the installation of the tracking system, Savadia said.

The Amber devices start at $11,995. Clients purchase the device outright, but they also pay annual subscription fees of about $4,000 to Amber Connect, covering software licensing and upgrades.

Amber Connect was launched in 2015. Its shareholders include Savadia, Maria Lapuskina and Monisha Shah.