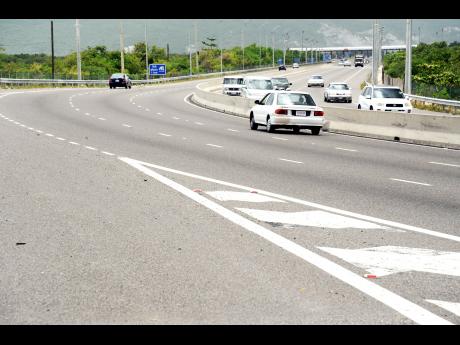 Norman Grindley
A segment of the Portmore toll highway. More companies are heading to Portmore, an expanding municipality, creating the need for more commercial space. Gladstone Loshusan is about to build a business ceentre to take advantage of the demand.

The new Sovereign Village Plaza in Braeton, Portmore, is over 90 per cent occupied with only three units out of 55 still on the market for rent, according to Sagicor Property Services representative Janine Jackson.

Rental agreements for two of the shops with a cafÈ and an electronics store are pending the down payment of deposits. And Sagicor Property, which manages the Village on behalf of its owners, is considering using the final unit as a conference centre, Jackson said.

Construction of the commercial complex was completed in late 2015. Jackson disclosed that a new business centre is to be developed on adjoining property, to provide space for offices such as architectural consultancies and legal firms.

"They are still going through the approval process," she said, but noted that the centre would be on a smaller scale to Sovereign Village, a $1.4-billion development undertaken by Gladstone Loshusan.

Attempts to reach Loshusan for comment on his new project were unsuccessful. Jackson said the business centre would facilitate increasing demand for commercial space in the municipality.

Among the most recent businesses to expand to Portmore are Monarch Pharmacy, which now occupies space once slated for a banking hall, Child's Play, Broadbent, Educom, and several food franchises.

Other companies, such as Island Grill, FLOW, and Digicel, have used space at the new plaza to add new branches, Jackson said.

Within the food court at Sovereign Village, most of the operators are new companies. Shops range in size from 500 to 4,000 square feet, in the main. The centre also hosts a Progressive supermarket, a chain owned by the Progressive Grocers consortium of which Loshusan is a member.

Rental rates at the Village range between US$16 and $18 per square foot per year, Jackson said.