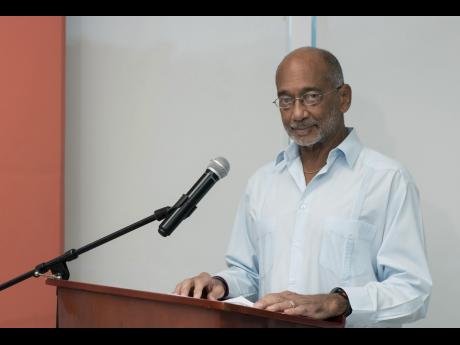 Douglas Orane, former chairman and chief executive officer of GraceKennedy Limited, making a presentation to the Acorn/IDB forum on Growth & productivity, at the UWI Regional Headquarters in Kingston on October 10, 2017.

"People who show up late for meetings live in poor countries."

It's a statement credited to an entrepreneur specialising in enterprise solutions to poverty in developing countries and repeated by business stalwart Douglas Orane at the Acorn Group/IDB seminar on productivity and growth at the University of the West Indies last Tuesday.

In detailing his prescription for drastically improving productivity in the workplace, Orane insisted that a zero-tolerance approach to lateness is one of the simplest remedies every leader can employ for immediate results.

He's right on the money. In fact, a single employee who shows up 10 minutes late for work or returns 10 minutes late from lunch each day in 2017 would have squandered the equivalent of one full week paid vacation leave by the end of this year.

Chronic lateness is also associated with a culture of indiscipline, inefficient meetings and outputs, missed deadlines, low staff morale, and poor work performance the cumulative cost of which can wipe out profits of the most viable businesses. Employees who are chronically late are unwittingly making their organisations and companies poorer as are leaders who accept their behaviour.

It is a sobering, but timely reminder that embracing tardiness as 'Jamaica time' is a mindset that is impoverishing our country's coffers, individual pockets, and general quality of life.

As impactful as punctuality may be to our competitiveness and growth prospects, it is just the tip of the iceberg when assessing productivity, which, in the simplest terms, is defined as a ratio between the output volume and value and the volume of inputs such as labour, capital, and equipment.

The critical question is exactly how much we can gain by improving productivity at work.

A remarkable case study shared by Orane and outlined below should be especially exciting for small-business leaders and managers intent on enhancing competitiveness, customer value, employee satisfaction, and profitability.

"In 1995, Jamaica was in crisis, and so was GraceKennedy. Within our group, we were granting wage and salary increases of 20 per cent, and by the end of the year, inflation had ended up at 40 per cent. We recognised that the aspirations of our GraceKennedy people could not be met on such a path. We, therefore, set an objective to double the productivity of every employee within five years, that is, by the year 2000. Many said it was impossible, but we didn't listen.

"We launched an extensive campaign to involve every single employee as to the meaning of productivity and how important it was to their personal and professional lives. We coined a slogan 'Double the productivity of everyone from Raf to Rupert' Raf was the chairman and CEO and Rupert was one of the messengers. It worked!

"What gets measured gets done, and instead of getting caught up in complex measurements, which could not be easily understood by everyone across a complex group, we chose one measure as the surrogate for productivity increases. The measure was the growth in profits in equivalent US dollars per person annually.

"The approach may have been imperfect, but it worked. An important component of this transformation was in manufacturing. With the opening up of the economy through liberalisation, our factories were being savaged by foreign competition. We made the decision not to fold, but instead to double down on modernising our factories. We did this by closing each of them for about three months to retool. At the same time, we moved to a new system of teamwork on the factory floor.

"Instead of each worker being a specialist, the new methodology was flexibility individuals working in teams, with each one doing whatever was required at a particular time moving goods, adjusting machinery, cleaning up, and doing their own quality-assurance tests. In many cases, this required employing new people out of high school, with four CXC passes, who had good problem-solving skills. A new payment method was introduced based on linking remuneration to output, which we named variable pay.

"Each team was paid on their weekly and monthly production once it met our rigorous quality standards. Our expectations were far exceeded within six months, increases in productivity of 100 per cent or more. A critical part of this experience was the engagement of workers and trade unions, months in advance, to explain in detail the future plans.

"One of the fears of some managers was that workers would sabotage production. Instead, the opposite occurred, with greater dedication to work leading up to the impending closures. I remember one rank and, file member saying this to me :'Mr Orane, what took you all so long to do this? We could see what needed to be done'. Having a viewpoint from the ground level illuminates what is important to change.

"Around this time in the late '90s, we did an extensive survey of employees to get feedback. One of their suggestions was to move from the old paternalistic system of Christmas bonuses to a merit-based incentive process. We acted on their ideas, linking both performance appraisals and company profitability to the calculation of incentive payments."

A key takeaway from this case is that there is tremendous opportunity in owning up to Jamaica's decades-old productivity trap and implementing bold actions to break it.

Indeed, for many enterprises the key to unlocking increased profits in as little as six months could lie in simply doing more tomorrow with the exact same resources they have today.

- Yaneek Page is an entrepreneur and trainer, and creator/executive producer of The Innovators TV series.