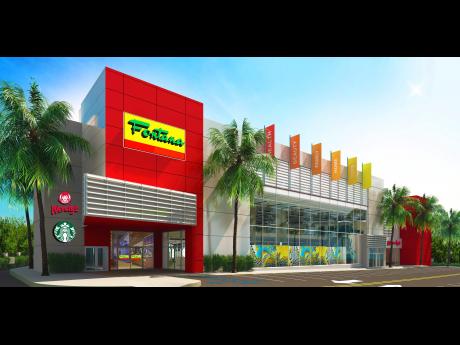 Fontana Pharmacy, retailer of pharmaceuticals and department store goods, is planning its largest store yet in a new development dubbed Waterloo Square, a multipurpose complex being developed by Eddie Azan at the intersection of West Kings House and Waterloo roads in Kingston.

Construction of the complex, designed by Virtuous Architects, began in July 2017, but the project was only announced this week. The 35,000-square-foot store, planned for opening by the latest summer 2019, will be the sixth in the Fontana chain owned by the Chang family.

The store will occupy two floors, featuring elevators and escalators, in space leased for 20 years.

Fontana Chairman Kevin Chang said the new store would eclipse the one in Montego Bay, which spans 20,000 square feet at Fairview, a commercial complex that was also built by Eddie Azan.

Described as the company's biggest investment to date, the new store will feature multiple 'store within a store' concepts, Fontana said in a release, but company officials with whom the Financial Gleaner spoke declined to disclose the value of the investment.

Said Chang: "The location is attractive and central. Mr Azan has a brilliant track record of development, for instance, the whole of the Fairview area in Montego Bay. Look at it now. Waterloo is a very strong location."

Fontana Waterloo, being the largest, is also slated to become the chain's new flagship store, Chang added. It is expected to create 80 new jobs.

Fontana Pharmacy was first established in Mandeville in November 1968 by Bobby and Angela Chang.