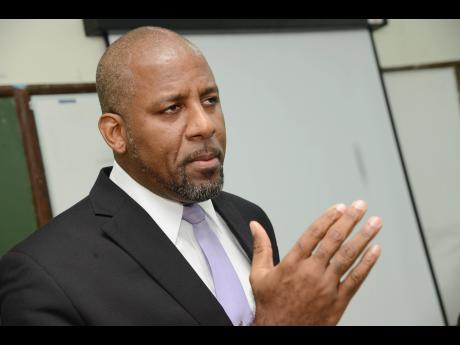 Despite robust construction activities and billions of dollars in higher expenditure during the quarter to June this year, contribution of the industry to the growth of the Jamaican economy remains weak because more than 90 per cent of raw material for some projects are imported.

Real value added for the industry grew by an estimated 1.2 per cent during the review period due to growth in both the other construction and building construction components, according to the Planning Institute of Jamaica, PIOJ.

In reviewing Jamaica's economic performance for the quarter at a press briefing in New Kingston last week, Henry pointed to public pronouncements regarding growth in the construction industry remaining at just over 1.0 per cent "despite strong sales of some construction inputs".

He explained that an examination of preliminary sales performance of key inputs for the construction industry - including construction material, plumbing and heating equipment, paint, glass and other hardware supplies - indicated that there was a real increase of 8.2 per cent during the review period.

"It is important to note, however, that while this may be an important indicator of performance by the industry, a one-to-one relationship does not exist between sales of construction inputs and growth in the industry," he said.

"The measurement of economic growth for a country is the summation of value added by each industry," said Henry, referring to a statement by director general of the Statistical Institute of Jamaica, Carol Coy, at a press briefing earlier this year.

Simply put, he said, "it is the incremental value created by an industry, which means that all inputs utilised but created in other industries must be deducted, leaving only the additional value added by the industry being assessed".

In instances when the inputs are locally produced the impact on overall growth is stronger, he added.

"However, in instances where these raw material inputs are largely imported, the majority of the growth is registered in the economies of external trading partners, and this limits the potential for additional growth in the domestic economy," said the PIOJ head.

"Therefore, the assessment of growth performance must take into consideration the potential offsetting impact of the high import content on the final output."

Data indicate that the import content for some construction projects are in excess of 90 per cent of the total project cost. "This, therefore, partly explains why significant investments in construction activities are not translated into significant value added in this industry," said Henry.

He noted, however, that the economy will derive greater and more sustained benefits after completion of the construction. For example, a newly built hotel "will realise a greater and more sustained impact on growth as more stopover visitors are registered and greater demand is generated for domestically produced food, manufactured items, and services" during its operational phase, he said.

"Similarly, with the construction of a road, the more sustained impact on growth will be realised through time and cost savings incurred as a result of shorter commuting time and better road conditions."