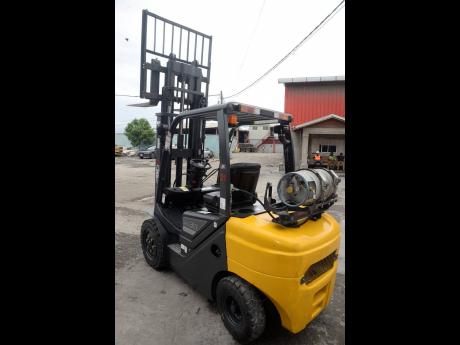 Lionel Rookwood
An Arc-branded forklift on display at Arc Manufacturing’s complex in Kingston May 29. 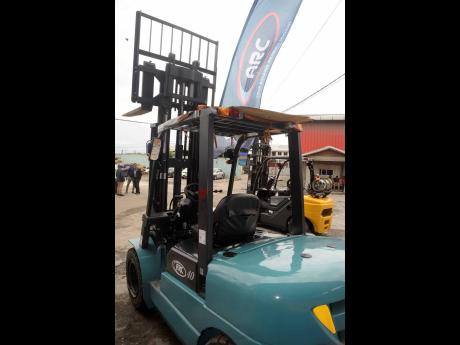 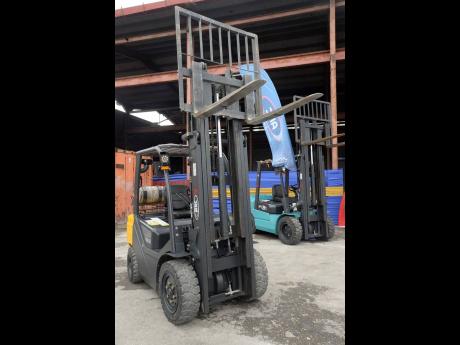 Arc Manufacturing has struck a deal with Chinese firm Biola to produce a range of forklifts to be sold under the ARC name.

Executive Chairman Norman Horne says he spent about three months touring facilities and looking at different models before settling on a supply partner.

Horne says the normal route for the procurement of forklifts in Jamaica is to purchase second-hand brand-name units at auction such as Hyster or Toyota, and ship them in.

The problem is that wear and tear in the industrial world has less to do with calendar age than hours of use. It is therefore not a stretch to find that a six-year-old forklift can outperform one that is, say, four years old, simply because the newer one was used for more hours, according to Horne. He says many who procured equipment on the basis of age ended up with machines in need of frequent repair.

His own firm, he added, was among them.

“In former times, many industrial firms had these second-hand forklifts that we had to rely on and the downtime was simply horrendous. It was unbelievable the parts issues and service issues we had,” Horne said of the 22 forklifts that made up Arc’s fleet.

Arc Manufacturing has been expanding into new areas – including the commissioning, two weeks ago, of a metal slitting plant – undeterred by the problems of a sister company in the Arc Group called Arc Systems. The latter company, which is said to owe a $25.8-million debt to Exclusive Holidays of Elegance Limited in Montego Bay, has been forced into liquidation and that process is making its way through the courts. Supreme Court judge David Batts has appointed an interim receiver to wind up Arc Systems and the parties are due back in court on June 20.

Horne has told the Financial Gleaner he does not expect his other companies – the Arc Group comprises around 17 companies – to be affected by the winding up of Arc Systems, whose assets the judge has ordered to be tracked down by the receiver, if any exists.

Arc Manufacturing has initially invested US$1.6 million in the development of its forklifts and the creation of a division to handle distribution and sale of the equipment to Jamaican companies, Horne says.

The Bell Road, Kingston-based company has been testing the Biola-made forklifts in its own shop for six months to assess their functionality.

“We brought in 10 so far, and the purpose of that was so that we could test them. We did that over the last six months and we’re absolutely pleased with their performance, and we’re ready to make them available to the public,” Horne said.

“The type of work we had to use 22 old forks to do, we now use 10 to do the same, with excess capacity left over,” he added.

Horne says the Arc forklifts span the full range, from 10 tonnes down to 3 tonnes of lifting capacity. They are available in diesel engines for heavy industrial applications and flex fuel gas/LPG for closed warehouse or food-processing applications.

He would not, however, say the price of the units, only that an average forklift would be about 70 per cent of the cost of a second-hand name brand forklift. Checks by the Financial Gleaner indicate that a Hyster would run about $48,00 to $54,000.

Arc Manufacturing has ordered 100 forklifts from Biola, of which 10 has been delivered and another 20 is due to be shipped by the end of June.

Four of the forklifts have been sold so far, and Horne says he will be offering full servicing of the equipment.

“We’ll be taking 20 for our personal use and release 80 to the trade,” said Horne.

“We have all the parts. There are two mechanics and we’ll be taking on some from the automotive school [JAGAS]. They are being trained to service these units. This should allow us to provide a full package,” he said.

Correction: This story has been updated to correct the lifting capacity of the forklifts.