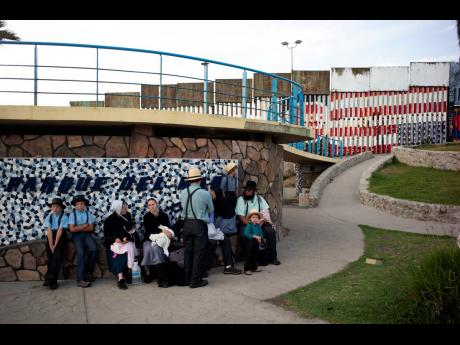 AP
Tourists from Ohio Amish country wait for a taxi after visiting the border wall (behind) that separates San Diego from Tijuana, Mexico, Tuesday, June 11, in Tijuana. Mexico appears poised to come out ahead in the new trade pact demanded by the Trump administration.

For the past two decades, Brazil has been the rising star of Latin America. Representing the first letter of an acronym that would define an investment era, it became the top destination for foreign direct and portfolio investment.

The BRICS concept drove trillions of dollars of investment and reshaped the Latin American landscape. A generation of Brazilian politicians, particularly the political left, rode the BRICS’ coattail.

Luiz Inácio Lula da Silva and his band of PT cronies used it to gain legitimacy. They moved into the spotlight, quickly joining the globalisation circuit. They hobnobbed with the world’s business, political and academic elites at Davos.

Brazilian businessmen were close in trail, pitching deals to attract huge investment schemes. Some were successful. Others were not. Nevertheless, no one seemed to care.

With China quickly rising up the ranks of the richest countries, Brazil was ready to quench its endless thirst for protein, soybeans, iron ore and wood products. Millions of Brazilians emerged out of poverty, as inflation subsided and credit spread. Bankers’ wages soared in São Paulo, as did real estate prices. The memories of the 1980s debt debacle, hyperinflation and the 1998 Samba currency crisis became a distant reverie.

Armed with cheap capital, self-assured Brazilian businessmen stole a march across Latin America and the rest of the planet, snapping up banks, breweries and consumer product companies. Their ambition knew no limit. Brazil was at the vanguard of globalisation, an unstoppable trend that would reshape everything forever — or so it seemed.

In 1989, Mexico completed its Brady bond deal, setting the blueprint for the rest of the other developing countries to emerge from their debt defaults.

In 1990, Mexico privatised its huge state-owned telephone company, TELMEX, becoming the first sale that would transform the telecommunications industry in the developed and developing world.

In 1992, Mexico signed the North American Free Trade Agreement, NAFTA, a monumental vehicle which would catapult the country into the forefront of global manufacturing.

Mexico’s credit rating steadily improved, and it was the main destination for emerging market investors — that is until China was allowed to join the WTO in 2001. That’s when Mexico moved to the back burner. However, the international winds are shifting again, and Mexico’s status is about to get a makeover.

As soon as China joined the WTO, manufacturers around the world raced to take advantage of its cheap labour costs. Entire industries decamped for China, laying waste to much of the manufacturing world.

As China became more prosperous, it developed a ravenous appetite for commodities, raising the prospects for huge raw-material goods producers, such as Brazil, Russia and South Africa. Mexico was able to hang on due to its physical proximity to the United States, which virtually eliminated transportation costs.

Yet, setting up in China came with strings attached. Beijing forced manufacturers to take on local partners and to transfer technology. Soon, Chinese firms were no longer partners, but competitors seeking to steal market share. After the 2008 financial crisis, it became evident that it was only a matter of time until China would become the world’s economic hegemon.

The West’s romance with globalisation began to fade, and a new air of regionalisation and isolationism began to blow. Buoyed by an electorate that suffered the economic ravages of globalisation, a new generation of leaders turned up the pressure on China.

Europe’s silence to Donald Trump’s endless attacks on China has been deafening. Now, manufacturers are taking matters into their own hands. Global foreign direct investment has been declining for some time, as doubts about supply chains mounted. Now, changes in technology and trade agreements are leading to a process of reshoring as industries return home.

Given that Mexico was smart enough to renegotiate NAFTA into the US-Mexico-Canada Agreement, the USMCA, it will now benefit from the changes that are taking place. As a result, Mexico has once more become the darling of the emerging markets, pushing ahead of Brazil.

The globalisation pendulum has reached its zenith and it is now moving towards autarky. And, the winner from these geopolitical changes will be Mexico — at least for the foreseeable future.