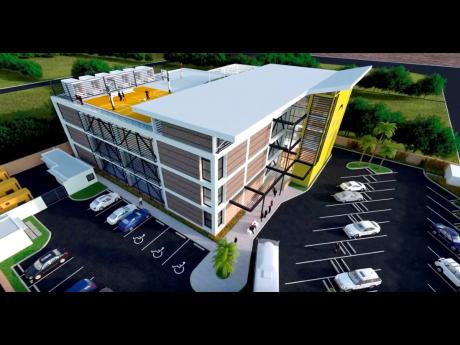 CEAC Outsourcing Com­pany, a local entity in the business of labour recruitment, has diversified its business model to include a construction division that deals in the ­buildout of business spaces and housing development.

The company hopes to increase ­revenues from Jamaica’s business process outsourcing (BPO) sector, which is expected to hit US$75 million by 2020, and the housing industry as mortgage providers jockey for market share through new financing deals on the heels of lowering tax burdens on real estate transactions by the Government.

Its first project is the construction of a 60,000-square-foot BPO space at Lot 31 in the Kingston 876 commercial complex located in Ferry, Kingston, which is expected to be operational by January 2020.

Trading as International Business Spaces, CEAC hopes to lease the facility to a BPO operator that’s looking to provide employment for at least 2,000 individuals.

International Business Spaces has budgeted US$5 million (J$655 million) for construction but, so far, has only laid the foundation for the building. The BPO facility is partially funded by the Development Bank of Jamaica and will be outfitted with amenities such as a basketball court, water-storage tanks holding 35,600 gallons, or three-days’ supply, of water and parking space for 60 cars.

“We are currently in discussions with both local and international BPO operators to enter lease arrangements, but we hope to go higher up the value chain by signing with a knowledge process outsourcing company,” Business Development Manager Howard Coxe told the Financial Gleaner.

Like the 34 other occupants of the Kingston 876 complex, International Business Spaces anticipates that its tenant will benefit from greater efficiencies with the overpass that connects the development to the Mandela Highway.

“It was strategically chosen because of the location. It is good proximity for the people who will be working there, and employees will also have easy access to ­transport,” Coxe reasoned.

On completion of the buildout of the business space, CEAC will turn its attention to an 8.42-acre housing project in Bushy Park, St Catherine. The project is slated for groundbreaking in February and is being developed as a “green community”, further capitalising on a 260-year-old aqueduct that runs across the property.

“In developing the community, we have set aside funds to ­renovate the aqueduct. This ­renovation will be done with the Jamaica National Heritage Trust, and we will also have a rainwater run-off system built into the ­community to be channelled into the aqueduct,” Coxe said.

What’s more, the community, which will go by the name ‘Aqueduct of the Vineyards’, will give property owners the option of installing solar panels and electric vehicle charging stations in their homes.

Coxe told the Financial Gleaner that the company will invest US$6.5 million (J$852 million) in developing the housing scheme and estimates that the units will be sold for $17 million each.

CEAC started out as a human resource management and staffing supply firm in 2015 and roughly a year later acquired the ­property at Ferry from the Cascade Group before securing the title for the Aqueduct of the Vineyards, which sits four kilometres from the Old Harbour Toll Road, earlier this year.

Prior to its launch into the construction industry, CEAC was granted an environmental ­permit to construct and operate a waste incinerator facility at New Yarmouth Estate, Clarendon, under the business CEAC Solutions. This was part of the pilot phase of the project in which CEAC was allowed to conduct incineration of sludge and obsolete chemicals from J. Wray & Nephew, ship-generated (food) waste, and medical waste.

Since the completion of the pilot phase of the project, CEAC has sought permission from the National Environmental and Planning Agency (NEPA) to use the Ferry property as a temporary base for the operations of the waste incinerator until the building is complete and ready for tenancy next year. CEAC has been in discussions with NEPA to develop a permanent base at Sheckles, Clarendon.