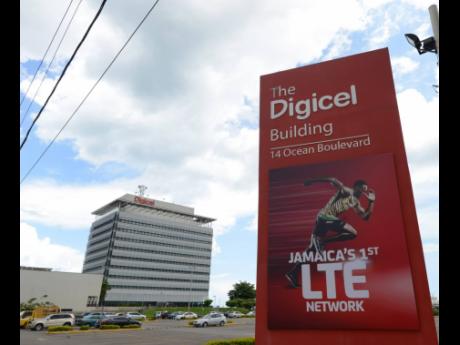 File
The Digicel Group regional headquarters on the Kingston waterfront.

Telecoms provider Digicel Group posted a nine per cent drop in its earnings for its fourth quarter ending March 2019, and is expecting its debt levels to rise.

The company said its earnings were impacted by one-off costs.

“We are fully committed to returning the business to a more sustainable leverage level,” said Antonia Graham, head of group communications, in response to Financial Gleaner queries about the financial results.

Digicel, which had its beginnings in Jamaica but now spans 32 markets internationally, recorded a three per cent decline in revenue for the quarter to US$570 million, but the telecoms said top-line income would have grown 1.0 per cent were it not for currency movements and other one-off costs.

Its earnings before interest, tax, depreciation and amortisation, EBITDA, totalled US$230 million in the quarter, down 9.0 per cent year-on-year.

Digicel also indicated that its net debt was projected to rise to 7.0 times its earnings in 2020, up from 6.7 times earnings in 2019. But the company said bondholders should not be overly concerned about the rise as it plans to reduce its leverage over time.

“This will take time. However, the momentum that we are beginning to see in the underlying revenues provides us with comfort that we can return the business to full-year revenue and EBITDA growth and begin to deliver organic deleveraging,” said Graham.

Digicel expects single-digit growth in its earnings in 2020, but thinks this would be sufficient to allow it room to reduce debt. It expects to see underlying revenue growth across all business segments, in particular a return to growth for the full year in its mobile business and the continued performance in business solutions and home and entertainment segments.

Digicel said its fourth-quarter EBITDA was adversely impacted by full-year charges booked in the quarter.

Digicel, like other telecoms, continue to face challenges in monetising the shift from voice to data services. Added to that are heavy capital expenditures, one-off costs and currency movements.

The telecoms continues to meet its interest payment obligations on its bonds. However, earlier this year, Jamaica’s JMMB Group recommended that its clients sell their bonds, saying Digicel’s results, which at the time referenced its third-quarter earnings, had not improved in line with expectations, making the servicing of the bonds continuously challenging.

In January, Digicel extended the timeline for the payout of bonds due by 2020 and 2022 to 2022 and 2024, respectively. Rating agency Moody’s assigned a limited default status to the bonds following the extension, although it revised the rating to Caa1, up from Caa3. Despite the benefits from the two-year debt extension, Moody’s labelled the transaction as ‘distressed’, mainly because of Digicel’s “untenable capital structure”, with high leverage of around 6.7 times gross debt to EBITDA.