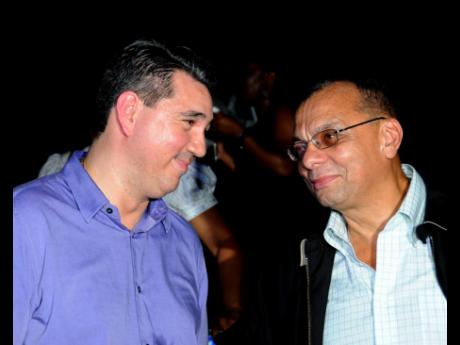 File
File In this September 2012 photo, John deSilva (left) and James Rawle converse at a Nestlé Jamaica event in Kingston. Both men now work with the Lasco group.

Trinidadian John deSilva has been hired to run Lasco Distributors Limited, closing the vacancy for managing director that had been open for nearly two years. DeSilva, who took office on March 1, eases deputy executive chairman James Rawle of his...

Trinidadian John deSilva has been hired to run Lasco Distributors Limited, closing the vacancy for managing director that had been open for nearly two years.

DeSilva, who took office on March 1, eases deputy executive chairman James Rawle of his dual role as acting managing director, in the wake of the resignation of Peter Mark Chin in April 2019. Chin departed the company after 27 years, giving up the deputy chairmanships that he also held for the three affiliated companies, Lasco Distributors, Lasco Manufacturing Limited and Lasco Financial Services Limited, in the process.

Executive chairman Lascelles Chin initially stepped in to oversee the distribution subsidiary, which markets products made by its sister manufacturing operation; then Rawle stepped in later, taking on the added responsibility in addition to his own job as managing director of Lasco Manufacturing.

As an executive with over 25 years of international experience in the food and beverage, nutrition, home care and personal care business, deSilva joins Lasco Distributors with market knowledge of Trinidad & Tobago, Switzerland, Dominican Republic and Mexico.

He has also worked in Jamaica and would know the inner workings of one of Lasco’s rivals, Nestlé Jamaica, having held senior executive positions there, as well as regional insights, having served as country manager of Nestlé Caribbean Inc, and as Nestlé Professional’s head of supply chain and operations for Latin America.

Of note, Rawle was also once the country manager for Nestlé Jamaica.

On the export side of business, Lasco could leverage deSilva’s understanding of the region to make headway into new markets or beef up exports where it already has a footprint. A similar strategy was employed by the company when it hired former Jamaica Beverages Limited executive Paul Shoucair in 2016 to grow exports of Lasco’s iCool drink initially to Trinidad, but, eventually, to 62 countries overall. The popular iCool drink, a big moneymaker for Lasco in the beverage market, is made by Lasco Manufacturing and distributed by Lasco Distributors.

DeSilva, a fellow of the Association of Chartered Certified Accountants of the UK and an alumnus of the IMD Business School in Switzerland, gave up his job as managing director of Unilever Caribbean Limited to take up Lasco’s offer. Lasco Distributors previously had distribution arrangements with Unilever Caribbean for cold storage and dry foods portfolio, but the relationship was discontinued in 2017 under Peter Chin’s leadership, in order to reduce operating costs.

In a statement, Lasco Distributors said the new company head comes to the job with a record of turning around underperforming businesses through product and market development, efficiency improvements and restructuring. The company has not responded to requests for comment.

Both Lasco Distributors and Lasco Manufacturing have improved their performance under the pandemic – the distribution company’s sales improved by nearly a billion dollars to $15.2 billion over nine months, April to December, while earnings in the period rose by around $174 million to $731 million; the manufacturing operation added $300 million to revenue, growing the base to $6.2 billion, and grew earnings by $238 million to $1.02 billion.

The performance was attributed to the companies’ timely response to changes in the market throughout the pandemic.