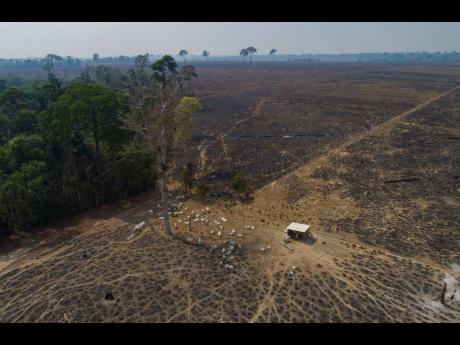 Deforestation in the Brazilian Amazon dropped for the second consecutive month in August compared to the samiliar period in 2020, according to preliminary data newly released by the Brazilian National Institute for Space Research.

Forest destruction in August reached 918 square kilometres (354 square miles), the lowest indicator for the month since 2018 and 32 per cent less than in 2020, according to daily alerts compiled by the institute’s Deter monitoring system.

That data is considered a leading indicator for complete calculations released near year end from the more accurate system, Prodes. Following four earlier months of increase, the accumulated deforestation in 2021 has now declined slightly by 1.2 per cent compared to last year, according to the preliminary data.

Márcio Astrini, executive secretary of the Climate Observatory, a network of environmental non-profit groups, told The Associated Press that it’s premature to know if there’s a clear trend of decreased deforestation.

Bolsonaro has encouraged development within the Amazon region and dismissed global complaints about its destruction as a plot to hold back the nation’s agribusiness. His administration also has defanged environmental authorities and backed legislative measures to loosen land protections, emboldening land grabbers.

The government recently has tried to improve its environmental credibility. Last Thursday, Bolsonaro told leaders of the BRICS group – which also includes Russia, India, China and South Africa – that he is committed to protecting the environment and complying with the Paris climate agreement.

But Astrini of the Climate Observatory said he saw no change in government attitudes that might favour reduced deforestation.

“Environmental fines remain uncollected in Brazil and there are just few enforcement operations,” he said, seeing no clear policy explanation for the improved numbers. “The government ignores the environmental issue. The deforestation numbers just depend on the will of the criminals.”

Burning to clear land in the Amazon region has become a growing problem. According to the space agency, in August more than 28,000 fires were registered in the region, the third highest indicator for the month since 2010.