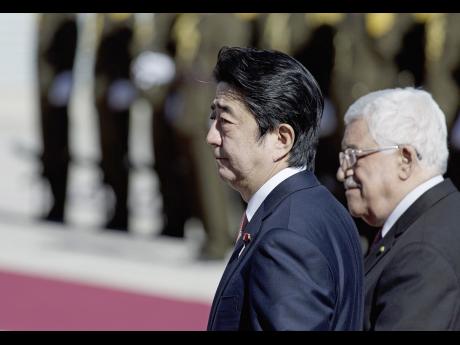 Fifty-five years ago, Nobosuke Kishi, Japan's prime minister, resigned just after winning the battle to push the treaty revising the country's military alliance with the United States through parliament. The demonstrations against it were so massive and violent that his political capital was exhausted. Today his grandson, Prime Minister Shinzo Abe, is waging a quite similar battle, but he will probably get away with it. More's the pity.

Abe, like his grandfather, is on the right of Japanese politics, and his target this time is Article 9 of Japan's post-war 'Peace Constitution'. That clause undermines his vision of Japan as a 'normal country' (like the United States, Britain or France) that sends its troops overseas to fight wars.

The language of Article 9 is clear. It says that "the Japanese people forever renounce war as a sovereign right of the nation and the threat or use of force as means of settling international disputes. ... Land, sea, and air forces, as well as other war potential, will never be maintained." It would take a pretty sharp lawyer to get around that.

Moreover, it's very hard to change the Japanese constitution. It would take a two-thirds majority in each house of parliament, plus a national referendum, to change or drop Article 9. Abe would certainly lose that referendum: 80 per cent of Japanese like Article 9 just the way it is.

Those are the opinions of ordinary Japanese, however. They are not so widely held among the elite - and Japan has an elite like few other countries.

A Japanese historian once told me in confidence that he reckoned around 400 people - politicians, industrialists and senior bureaucrats - make almost all the decisions in Japan. Moreover, they have been intermarrying for generations, and are almost all distantly related to one another. Which explains, perhaps, why the grandson of a 'Class A' war criminal is now the prime minister of Japan.

There's an interesting contrast between Nobosuke Kishi, who became Minister of Munitions in the Imperial Japanese government in 1941, and Albert Speer, whom Hitler appointed as Minister of Armaments and War Production in early 1942. Both men were arrested at war's end, and Speer was sentenced to 20 years in prison.

But Kishi was never charged, and while Speer languished in Spandau prison Kishi was freed, helped to found the Liberal Democratic Party that has dominated Japanese politics ever since, and was elected prime minister in 1957. In fact, the great majority of the '400' of that era were back in business by the mid-1950s: the United States needed to get Japan back on its feet in a hurry, and it had nowhere else to turn.

So here we are, half a century later, and their descendants are still in charge. Japan is a democracy, but the voters mainly get to choose between members of the '400'. Kishi's brother, Eisaku Sato, was prime minister for eight years in the 1960s and early 1970s, and his grandson, Shinzo Abe, became prime minister for the first time in 2006.

It's safe to say that most members of the elite have always wanted Japan to become a 'normal country' that is free to fight wars again. They aren't thinking about aggressive wars, of course; only 'just' wars, probably alongside their American allies. The big stumbling block has always been popular opinion - but Shinzo Abe has found a way around that.

If you can't win a referendum on constitutional change, then don't hold one. Just 'reinterpret' Article 9 so it means the opposite of what it seems to say. Shinzo Abe's cabinet did that last year, declaring that Article 9 really allows the military to go into battle overseas to protect allies - so-called 'collective defence' - even if there is no direct threat to Japan or its people. That covers just about every contingency you can imagine.

Last week, Abe pushed two bills through parliament that reshape military policy and structures in accord with that 'reinterpretation'. The opposition parties walked out and thousands demonstrated outside the parliament building, but the deed is done, and there won't be any referendum about it.

Unless some mass movement arises to protest against this cynical manipulation of the law, Abe will get away with it. The 'Peace Constitution' will need a new name, and the United States will finally have a Japan willing to fight by its side. No doubt that will make the world a safer place.

- Gwynne Dyer is an independent journalist whose articles are published in 45 countries.