Jaevion Nelson | Did I say that? 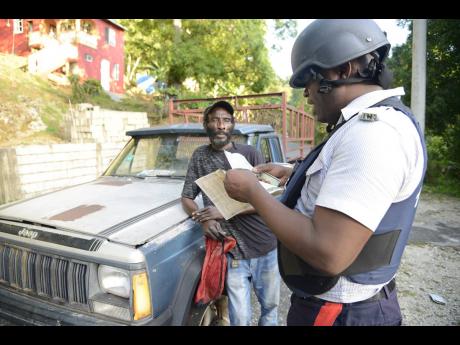 The way in which reports of an incident are recorded by the police is worryingly problematic and likely inhibitive to securing justice for some persons.

I am aware that, as the police like to say, the statement must be recorded in a way that it is understood by all parties, particularly if the matter is to be heard before the court. However, I find, based on two experiences making a report, that they are written in a sort of ‘police-legal-talk’, which isn’t necessarily how most people talk.

Last year, there were two incidents that required me to make a report to the police. I was rather hesitant where the first incident was concerned, and the police escorted me to the station to make the report in the second incident.

I had never had a (real?) need to report an incident to the police before, and I felt that not much, if anything, would come out of me doing so. Notwithstanding, I acquiesced to the wise counsel of a couple of people and went to make the report, albeit a few days late.

I ruminated on the experience for quite some time. All sorts of questions ran through my mind because although the statement wasn’t verbatim, it was all right (but it didn’t sound like me). I kept asking myself how this practice might affect individuals who are low-literate whose first language and primary language of negotiation is Jamaican. Does it affect their ability to recount what happened in an incident?

I also thought about the cross-examination of witnesses in the West Kingston Commission of Enquiry. There were instances in which some of them seemed unable to recall what had happened based on the statements they had given. I speculated whether their statements may have been similarly written like mine and why it seemed like some of them were less than truthful about their experiences.

In the second incident, the statement was typed, but the same rephrasing of what I had said took place. I read the statement, signed it, and left with a copy and my police receipt. Overall, it was difficult to give the account of both incidents because I had to stop and repeat so often.

I am no lawyer, but I left convinced that this is absolutely inhibitive to pursuing justice for some individuals. I learnt recently from a colleague that it sometimes makes trials difficult because when witnesses are being cross-examined, it’s not necessarily exactly what they said. It makes them look like liars before the court.

We need to develop a better system of recording witness statements. It can’t be by hand, and the police shouldn’t transcribe differently from what people report. If statements are written by hand, doesn’t that make it difficult to investigate, anyway? How do the police in Trelawny readily access information about an individual who may have committed other offences before?

I’d like to think that statements can be taken by a voice recorder or video and stored on a secure server so there is a verbatim account of whatever incident occurred. I understand that this is done in some jurisdictions. The police can write their own account of the incident or a summary of it, if there is a need to. It would make life so much easier for the police, I am sure.

If we want to improve access to justice, we have to improve the standard. We have to change how statements are taken by the police. Let’s provide the police with whatever they need to make this happen!