Tony Deyal | But not a drop to drink 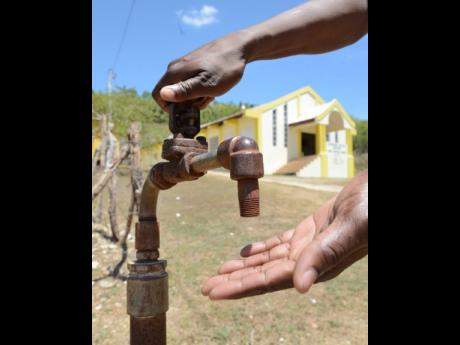 File
In this 2018 file photo a resident of Myersville in St Elizabeth turns on a pipe, which is dry.

In 1834, the poet Samuel Taylor Coleridge wrote “The Rime of the Ancient Mariner” in which, having shot the Albatross, the bird which was thought to cause the breeze to blow, the mariner and all the others on board the ship were doomed. As he lamented to everyone he could buttonhole and force to listen to his story, “Water, water, everywhere, Nor any drop to drink”.

I first read the poem in 1958 when I was 13 and having left home where, for a whole week, despite my father having paid a lot of money and a bottle of whisky to his “connection” in the local council to “expedite” a connection to our house, I woke up at four in the morning to take a quick bath from a bucket so I could go to school. I had filled the water from the stand-pipe at the foot of the hill where, perhaps because of gravity, we sometimes got some. For a long time that poem had the greatest impact on me of all that I had read so far, even the New Testament which was the mandatory text in our religion class in the Anglican or EC school I attended.

My reaction to the Coleridge stanza was very much like the way a Trini mother responded to the tears of her son when he was put out of elementary school. When she asked him what had happened, if some school bully had beaten him, the little boy told her that the teacher questioned him “How did Jesus Christ die?” and because he didn’t know the answer, she put him out of class and told him to go home and not to come back to school without one of his parents. The very angry mother, took her son to the school, demanded to see the teacher and declared, “Miss James, my son is a little boy and you asking him thing that even big people don’t know. You want him to tell you how Jesus Christ die when I didn’t even know that the poor gentleman was sick self!”

My predicament was that we in Trinidad had the same problem as the Ancient Mariner. We were, and are, surrounded by the seawater where, even in the dry season, the North East Trade winds pick up liquid that my teacher told me became “convectional rain”. The same three mountain ranges still cause the North East Trades to release “Relief” rainwater for six months of the year in our “rainy” season. We continue to have rivers and streams where some people still wash their clothes and some even have to boil and drink the water. From 1964, we had a “Water and Sewerage Authority” managing water distribution and several “reservoirs” they control but, despite all this, our taps remain dry for weeks and often months on a never-ending end. What I learnt then and have internalised since is that regardless of the name of the rain or type that fell, relief was not something that we would get or should expect from our governments.

Now, 53 years later, the situation is worse despite promises by all the different Governments and their boasts of “Water for All”. The promise remains but the date shifts as the Governments become shiftier than their dates. That day in class, listening to the story of the Albatross, I asked myself, who or what we killed that brought that doom upon us and even now, an Ancient Mariner myself, it still hangs over us without rhyme, reason or remedy.

We are not alone though. Three years ago, Daphne Ewing-Chow writing in Forbes magazine on “In search of a solution for water scarcity in the Caribbean” pointed out, “Barbados, given its lack of fresh water resources, has a water availability of just 306 cubic meters per capita per year, which make it the 15th most water-scarce nation in the world. Jamaica has suffered from an ageing and overburdened water system with tens of thousands of repeated leaks per year…” She added, “It is not surprising that, of the 37 countries that the World Resources Institute has identified as having “extremely high” levels of water stress, seven are from the Caribbean: Dominica, Jamaica, St. Vincent and the Grenadines, Trinidad and Tobago, Antigua and Barbuda, Barbados and St. Kitts and Nevis…”

It is incredible that people in these countries still have to pay huge water bills and even if they get sick from the water, because the Government prevents citizens from creating their own sources, even a “Get Well Soon” card is of no use. Water is so scarce that when you get it from the tap, despite its dark yellow or black colour you have to treat it like Holy Water and boil the hell out of it. If you don’t succeed in getting rid of the impurities, the holiness is multiplied in the washroom because you’re sure to get a few religious movements that cause you to shout out for help from the Deity. Now, with climate change, we get sudden, sharp showers interspersed with periods of drought. If we don’t capture and save the water while we have rain, when the droughts come it is not just farmers who lose their crops, although that, too, is a growing problem.

The poet, W.H. Auden noted, “Thousands have lived without love not one without water” and Jacques Cousteau, the famous explorer and conservationist observed, “We forget that the water cycle and the life cycle are one.” A few years ago, I was back in Trinidad for a while and suffered like everyone else from a daily water-shortage caused by the incompetence of the Government in power. The issue then, as now, is not only the management of the water resources of the entire region or their distribution to the population, it is whether water is a commodity to be sold to the citizenry by Governments or private agencies, regardless of the quality or availability of the commodity, or whether it is a right of citizenship.

It is easy to joke, as we did by the standpipes while we patiently endured long delays in long lines waiting our turn to fill our buckets, or took our quick, nightly, after-football wash, most times and depending on how dark it was, in our underwear. There is a story about a man who stood in the very long line in a posh section of Port-of-Spain, bucket in hand, waiting and waiting until he finally had enough. He threw down his bucket, jumped up and down on it until he flattened it and then screamed in anger, “I done with this. I am going to see the prime minister and tell him what I think about the incompetence of his government.” Two days later he was back in the line, a new bucket in his hand, quietly and sheepishly waiting his turn. The person in front of him queried, “I thought you said you going to the prime minister to give him a piece of your mind.” The man replied quietly, “You think this line long?”

Tony Deyal was last seen saying he believes his brand of dark, off-key humour is like drinking water in the Caribbean. Only a few people get it. Send feedback to columns@gleanerjm.com