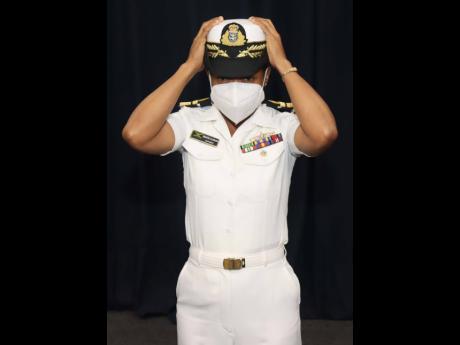 The new, and first female head of the Jamaica Defence Force (JDF), Rear Admiral Antonette Wemyss Gorman, should explain more precisely what it is about the declaration of states of emergency that makes them especially effective in crime-fighting, and if she shares her predecessor, Lieutenant General Rocky Meade's philosophy of why, and how, they should be used.

In her interview with this newspaper last week, on the eve of assuming command, Rear Admiral Wemyss Gorman implied that she does, which suggests that she is in favour of detentions with limited access to the courts and likely opens her to questions about whether she also backs the idea of amending the Constitution, to make it easier for governments to prolong SOEs, without the support of the political Opposition.

This policy matter is being considered by the Holness administration (it would be difficult to achieve without Opposition support, at least in the Senate) and is one on which this newspaper urges the administration to tread with extreme caution, lest it risks the abandonment of fundamental principles, which could then come back to haunt it should the Jamaica Labour Party (JLP), at some point in the future, return to the Opposition benches.

In other words, the tendency to politicise states of public emergency should end. Both the Government and the Opposition should get around the table, with civil-society interests, for a rational discussion on a joined-up national approach for addressing the crisis of criminality. That includes rescuing the national consensus on crime, which was signed by the JLP and the People's National Party (PNP) a year and a half ago. Very few of the timelines for doing things under that initiative have been adhered to.

Until the collapse of the states of public emergency, for lack of Opposition support and the weight of a 2020 court ruling that those in existence at the time were unconstitutional, SOEs were the centrepiece of the Government's crime-fighting from early 2018. Yet, like Rear Admiral Wemyss Gorman did in her Gleaner interview last week, the Government insists that they work when and where they are implemented.

DID NOT NEED SUPPORT

In a country that recorded 1,400 murders last year – a 10 per cent increase over 2020 – and has a homicide rate of 51 per 100,000, SOEs are politically popular. Nonetheless, last month the PNP allowed the latest of them to lapse when none of its senators gave the Government the single vote needed in that chamber to achieve the two-thirds majority for the vote to carry. Both houses of Parliament have to give approval by at least that margin for an SOE to continue after an initial fortnight. With nearly 78 per cent of the seats in the Lower House, the Government didn't need Opposition support there.

The administration's major poster child for the measure, especially in the early days of SOEs, was the parish of St James on Jamaica's north-western coast. After recording 335 killings the previous year (its homicide rate was 182/100,000), murders in 2018 fell 70 per cent. The decline nationally was 10 per cent.

But critics argue that despite their initial successes, SOEs aren't sustainable over the longer run, and soon begin to deliver diminishing returns because of their ballooning effect. Criminals move from where they are under pressure to other communities. More fundamentally, campaigners stress, they open the doors to the infringement of constitutionally guaranteed rights and freedoms.

Indeed, with the declaration of a state of emergency, the security forces have enhanced powers to search and detain people, without an obligation to take them immediately before the courts. In fact, in the 2020 case, a judge ruled that elements of the regulations under which three men were detained for between 177 and 431 days were unconstitutional, and held that the security minister's purported right under the rules to enforce detention breached the constitutional principle of separation of powers between the executive and the judiciary.

However, last August General Meade ridiculed Jamaicans who insisted on asserting these constitutional rights in the face of a crisis of criminality.

THE RIGHT TO LIFE

“We do not have an appetite to forgo, temporarily, some of our rights in order to secure the right to life,” he told journalists at a briefing at the army's headquarters, Up Park Camp. “...: We don't seem to understand that the right to life should supersede all other rights.”

Critics of General Meade, and his army predecessor and current police chief, Antony Anderson, another strong supporter of SOEs, argue that fighting crime and being committed to human rights shouldn't be mutually exclusive. Many people, this newspaper among them, found General Meade's statement deeply troubling.

In any event, the security forces, many analysts point out, don't need SOEs to do the major things that deter crime when the measures are in place: a heavy concentration of police and soldiers in communities. The police chief only needs to utilise his normal powers under the Constabulary Force Act and other legislation.

Further, the prime minister, under the Defence Act, can order the army to provide operational support to the police “for the purpose of maintaining and securing public safety and public order”.

Adds the law: “Where any member of the Jamaica Defence Force is acting pursuant to directions referred to in the proviso to subsection (2), such member shall, while so acting, enjoy all such immunities, privileges and protection as are enjoyed by a member of the Jamaica Constabulary Force.”

Rear Admiral Wemyss Gorman says the JDF's long-term perspective is to use various tools to help change Jamaica's “culture of violence. A state of emergency is just one tool that is available”.

The question, in this respect, is whether from her perspective the SOE is the most efficacious tool she could find, and one for which, like General Meade, she will advocate. Additionally, the chief of defence staff will no doubt consider whether SOEs will be good at helping to achieve her aim of not having JDF soldiers looking at Jamaican citizens “at the end of our rifle all the time”.

These, clearly, are matters for the chief of defence staff to work through and advise her bosses accordingly. In the meantime, notwithstanding whatever may have gone before, it would cost the Government and the Opposition nothing if they seriously re-engage in discussions on this matter. Crime and security have to be taken out of the partisan crossfire. To this end, the resumption of the Vale Royal-type tête-à-tête would be of value.