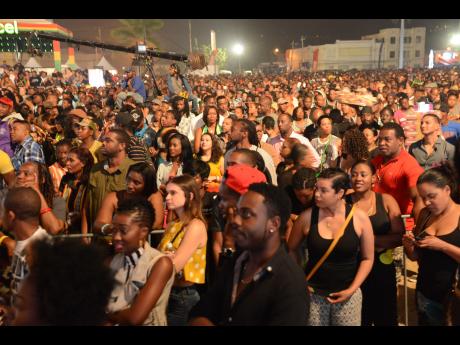 Rudolph Brown
A part of the large crowd which turned out for the Bob Marley 70th Redemption Live Concert on the waterfront in downtown Kingston last Saturday.

Last week, I included the links to three online responses to the previous week's column, 'Bye Bye, Boom Bye Bye', hoping that a wider audience would read them before I addressed sections this week.

I respond under certain parameters. One, this argument stale bad bad and I pursue it at the risk of killing the column. Still, print is forever and I reply for the record at the risk of good good argument that I have proposed descending further into personal cass-cass, which has no place in the people them good good Gleaner paper.

Also, I have the advantage of access to newspaper space, which they do not.

Lastly, my wife told me last year that I do not have the vulnerabilities that many people have. Hence, I am replying in as gentle a fashion as I am capable of. Which means that I may come off as being embarrassingly weak, and I are rather irritated that I are not going to dark up anyone like my dancehall hero Bounty Killer, but a sensible man pays attention to his wife's assessment.

Kei Miller wrote " ... I know Mel. Not particularly well, it is true, but I know him, and more than that - I like him. He seems a good, generally thoughtful guy and has written a lot of damn good articles. As well, several of my friends who know him even better always speak very highly of him and that is good enough for me. It is true that I am not the greatest fan of his poetry which is never bad, but for my tastes, always a bit too gimmicky - always seeming to nudge a little too hard - often too earnest with its message, too conscious of its puns and its various attempts at cleverness. His are the kinds of poems that work well with certain live audiences, but leave me a little cold. I'm also weary of a certain performance of masculinity that often takes place within the poems." (Read more at http://underthesaltireflag.com/2015/06/11/mel-cooke-and-the-problem-of-p...)

My reply: How knowing me or not and your friends' opinions of me come into what I argued? Further, how does your opinion on my previous articles or poetry? Nah, those are just set-ups to veer off course from what I argued in 'Bye Bye, Boom Bye Bye' and keep firmly away from the core of my argument.

Me lose off a you, man. Big time. I have always respected your superb talent, from my review of one of your earliest poetry collections to now. However, your reply has caused me to question your intellectual honesty, which never occurred to me before. The reason for writing is as important as the quality of what is written and, in this instance, I do not believe your motive in saying good or bad is honest. Otherwise, it would have been proferred previously and not prompted solely by something you disagree with.

Combined with the skirting of much of what I argued, I find what you put together vacuous, vapid and even vicious, in the polite way of the academic. Which is not surprising, considering that it is rooted in dishonesty about its intended purpose. Where does this leave me? Questioning your integrity and wondering how you treat the work of those vulnerable to you - like students or submissions to a publication which you edit, or simply someone who values your assessment under similar circumstances, if you do not agree with their opinion.

How do you treat people who are not able to reply, simply because you disagree with something they believe, people who do not have an effective avenue to respond?

For now, these are questions. I do not read enough of your blog to know if it is a pattern. I believe that this time around, you wrote in haste and anger, producing a visceral response with a sheen of analysis and cleverness to disguise its lack of response to what I said. This haste on the subject is a weakness and the resulting output well beneath you. Advice: Move like former Prime Minister P.J. Patterson. Type and taste your tongue. Think it through before you fly off the handle, type and upload. For when the tittering is over, then what?

Afifa Aza wrote: "Either way, I don't need to scold you or try to start a dissing match with you, although I and many others feel very disrespected by your words. Nevertheless, you have reminded me of something important about Jamaican life. Living in Jamaica gives all of us nuff cause for impatience, disgust, frustration and anger that often drives us to hurt each other and lash out with a certain Brand (Jamaica) of hate. Hate is what I would call it. Because people are not 'It'." See more at https://amedjafifa.wordpress.com/2015/06/08/open-letter-to-mel-cooke/?fb...

My reply: You know, you deserve a small boo for linking me with hate. Not a big boo, like the infamous one Beenie Man got at the National Stadium when Nelson Mandela came here. More like the small sample Ryan Bailey got at the same stadium earlier this year, which he took in excellent spirits.

You have come into the story very late. Many years ago, when I was a regular columnist and OutRage! was blazing, I wrote about a situation in Mandeville (I think) where a crowd had descended on a house intent on beating two men who someone had peeped through a window at and seen in sexual action. I wrote then that people had no right peeping into their private space. It still applies to everyone.

I also wrote a lot against the extremism that OutRage! represented. Still would.

I did respond to the cross-dresser with an 'h' - hilarity. Even I am surprised at some of the things that amuse me. I found the extreme efforts to get attention and persons around not caring two hoots very amusing. You are right that people are not 'It'. So, in their efforts to be the object of attention and raise objections to their presence, they should not reduce themselves to jackasses and ridiculous caricatures of human beings.

For those who came in late, this is what I wrote (pay attention to the second part of paragraph three and all of paragraph four):

"I was in Courts on Constant Spring Road, St Andrew, in December when I saw it. There were two of the things, but one was especially itty. It wiggled up the steps to the store's upper level behind a store employee. It wiggled, it simpered, it held its handbag in the crook of an arm with the wrist especially limp. It preened and smoothed down its hair and revelled in an oddly bronze complexion and surreptitiously glanced around to see the effect on those who were around.

The costume was the same, but the persona totally different - deflated and different. Simply a person, different from me but certainly not intent on and failing to disrupt sensibilities."

I am disappointed that neither of them spoke about some salient points in what I wrote about - that there was a time when dancehall artistes expressed a criticism of homosexuality with a conviction rooted in Leviticus, using the very violent terminology of the Old Testament, that the church gathering in Half-Way Tree opposing homosexuality means the church has formally entered the fray and dancehall should not enter this phase of the fray. It is a phase that is being played out not only in Jamaica, but especially in African countries, where the church remains strong, unlike its decline in the countries which introduced Christianity into their colonies in the first place.

If they, or anyone else, want to address these points, with the editor's permission, I will hand over the column space to them next week or whenever a reply comes. I rather doubt it will, though. This exchange is going nowhere. Next week, back on track with something relevant.