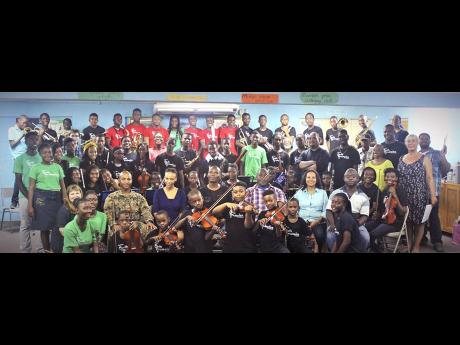 The National Youth Orchestra of Jamaica (NYOJ) ended their 2015 summer camp in fine style on Friday, hosting a free concert at the Camperdown High School, Kingston. The venue was small, but there was nothing little about the talent on display as the NYOJ put on an excellent evening of classical music that had the audience members screaming for encores when the show ended.

Approximately 60 students from the five NYOJ centres in Kingston and Spanish Town came together to deliver an evening of music the guests won't soon forget. Every performance for the evening was on point, and all the musicians - from the newly formed wind quartet to the more experienced senior strings quartet - delivered stellar performances that left the audience in awe.

The brass quintet signalled the start of the show by playing Jamaica's national anthem, after which the junior strings quartet performed Richard Meyer's Dragon Hunter. As they delivered their piece, enthusiasm and excitement shone in their facial expressions, showing their genuine passion. They went on to deliver a Merle Isaacs classic before making way for the senior strings quartet.

Clearly more experienced, the seniors took the concert to another level. They performed two folk songs, one an English favourite and the other a Jamaican classic. Their arrangement of Linstead Market by Canadian volunteer David Lakan was well received by the audience. A duet followed before the audience was again thrilled by the senior strings group.

The second time around, they brought in reinforcements, as the entire string band was called on for an epic performance. The group had the audience begging for encores, especially towards the end when a Peter Warlock piece had the musicians engaging in an instrumental battle, which the audience really enjoyed. Stellar performances from the wind quartet and the brass quintet followed.

Although the audience seemed to have enjoyed all the performances, the closing pieces appeared to resonate most as the groups came together to make up the band. With all the instruments now combined, the power and the talent of the NYOJ shone through in all their glory. Conducted by Rafael Salazar, the band delivered spectacular performances and, at one point during their rendition of Uptown Funk, members of the audience could no longer remain seated. They clapped and danced along as the band delivered the upbeat number to end on a high note.

Speaking with The Gleaner after the concert, executive director of the NYOJ, Karen Prentice, said she was pleased with the way the concert turned out and was particularly proud of the summer camp participants.

"I'm so happy," she said. "All that you saw in there today came together in a week. We started all this on Monday, so I'm really proud of how things turned out. It's always a challenge working with kids, but they rose to the occasion and delivered an awesome show today. Some of them had very little experience, but they learnt very quickly."

She went on to express joy at the growth and development of the NYOJ and the summer camp since it started in 2009.

"We've grown a lot since we first started. We now have centres in five locations in Kingston and Spanish Town and we hope to keep expanding," she said. "Our vision is to have centres all across Jamaica, so that we can build an excellent orchestra for the country."