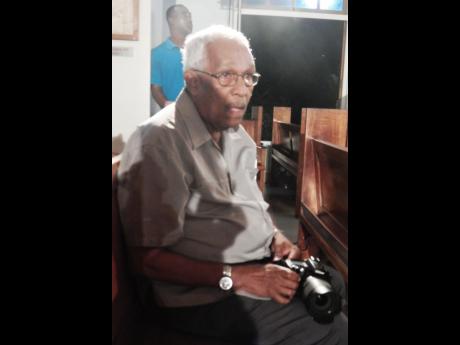 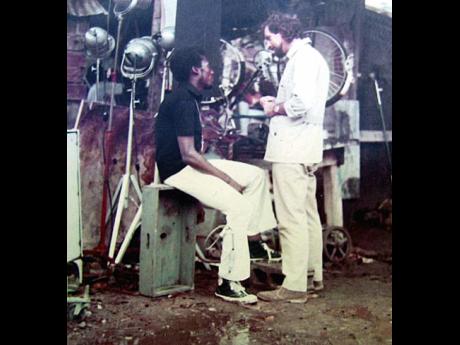 Contributed
Perry Henzell (right) on the set of 'The Harder They Come' with Jimmy Cliff in 1972. 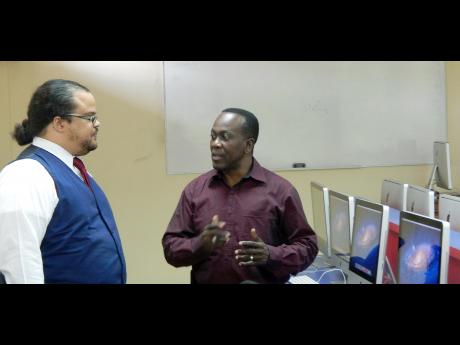 This is the second in a two-part article on two new CARIMAC programmes.

There has been "quite a demand" nationally and regionally for the BFA programmes in Animation and Film production, which begin next month at the Caribbean Institute of Media and Communication (CARIMAC), Professor Hopeton Dunn, head of CARIMAC, told me last week.

He said applications from outside the Caribbean have also come in. However, the Institute's intention is to launch the first year of the programmes - each with a maximum of 25 students - and get them "up and running" before embarking on "robust international marketing",

He said that after applicants get into the university with the required CSEC and CAPE subjects, they need to show they have particular skills for the CARIMAC programmes.

"For animation, they must have some background in visual communication, information technology and computing," he said. "It would be to their advantage to have a portfolio of work which can be assessed for certain aptitudes."

Those include the ability to draw, as in every year of the three years of the programme there is a drawing course. In the first semester, there is Life Drawing, and in the second, there is Drawing for Animators. Artistic skill is also required for the second-year courses Storyboarding and Digital Painting, among others.

"In film, they must have competencies in language and show some ability in visual language, however it represents itself in their careers," Dunn continued.

Experience in short story writing or in creating cartoon strips would also be assets, Dunn said.

"We also test their imagination. We are trying to get students who are visually and creatively prepared for the programme," he said.

He expanded on the suggestion that more is desired than just technical competence, explaining that the programmes offer a combination of practical training courses and theoretical understanding of film and the Caribbean environment.

"This is a university and here we're not only producing students with the technical competencies, but with a rounded background that will enable them to critically evaluate, to embed their work in a culture. So the Film Production programme will start with a course in Communication Culture and Caribbean Society," Dunn said.

"In the second semester, the course Understanding the Media is to deepen their grasp of the sector in which they are working. Then The Evolution of Cinematic Art teaches the history of film, including the history of film in the Caribbean."

Agreeing that the latter is a long one, Dunn and I briefly discussed the films made by the old Jamaica Information Service (JIS) film production unit, the multimillion James Bond franchise, which started in Jamaica, with Dr No, and the Perry Henzell hit The Harder They Come.

In the Film Aesthetics and Genres course, Dunn said, the question asked is, "what are the aesthetics and values one might see in a particular film and how they differentiate one type of film from another type?" He said, "Here, we want the students to insert some Jamaican and Caribbean values."

He then explained that the BFA programme is "a practical degree programme with artistic components of a substantial kind and involving more courses (and more university credits) than would normally be in a BA programme."

I asked about the possibility of experienced film practitioners who don't have the required CSEC and CAPE subjects getting into the programmes and he reminded me about the university's special admission provisions for mature students.

"The university encourages mature applicants as they come with skills and experience that may be in lieu of the usual admission criteria," he said. "There is usually a good symbiotic relation between the more experienced practitioner and the youngster coming up through the school system in a programme such as this."

The students' final project is practical - the making of a film, whether as a group or individual effort.

"The programme is not just absorbing knowledge and writing a paper. They (the students) must produce an end product they can use to promote and market themselves," he said.

"Why has it taken CARIMAC to take so long to offer these programmes?" I asked.

The answer lies in the convergence of three things.

"We've got to a stage now where the equipment is more affordable, the technology is more accessible and the markets more lucrative. And we are able now to move with dispatch into those markets," Dunn said.

The animation degree programme, called Animate Jamaica, is built on six-month certificate courses that have been taught over the last three years at CARIMAC and the university's Western Jamaica Campus (WJC) in Montego Bay, St James.

Dunn and I were speaking in a somewhat new animation lab talking with animation lecturer and Mona-Montego Bay coordinator David Soutar. It was then that I learnt 100 youngsters have graduated from the certificate programme, which has the backing of United Nations Educational, Scientific and Cultural Organisation (UNESCO), the Jamaican Government and Toon Boon (a Canadian-based animation production company).

Dunn said that with the new programmes CARIMAC is trying "to respond to what's in demand in a carefully prepared way, taking into account the needs of the Jamaican industry, the needs of the young people and of the university. The UWI must keep pace with other international institutions; otherwise we'll see a brain drain".

"What of the student who is not able to do the full animation programme at this university?" I asked. "Where else in the Caribbean could he or she could do it?"

"As many players in the region as possible should be encouraged to offer these programmes," he said. "The student demand is such that the need can't be met by one institution."

CARIMAC has led and will continue to lead in animation, Dunn assured me.