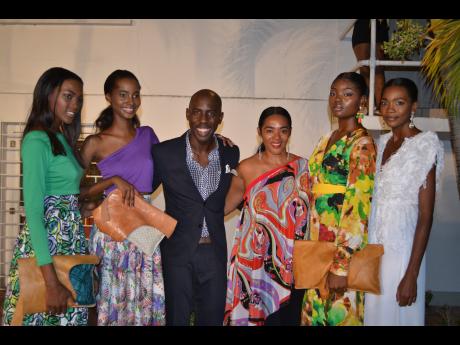 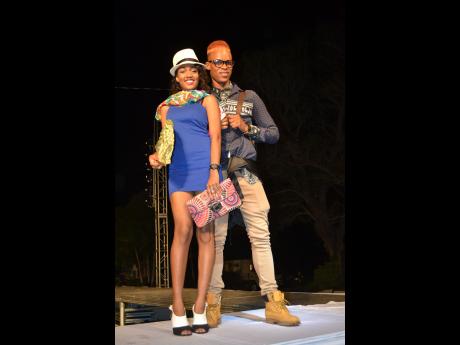 Renna Davis (in front) and Noel Watson, obvious winners of the ‘Accessorise Your Partner’ challenge. 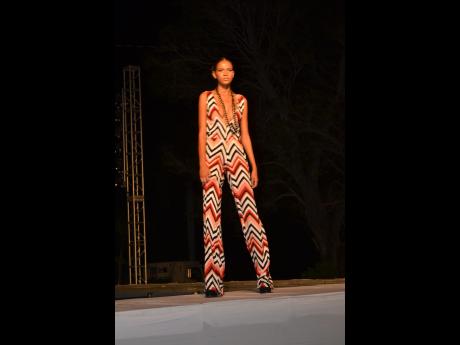 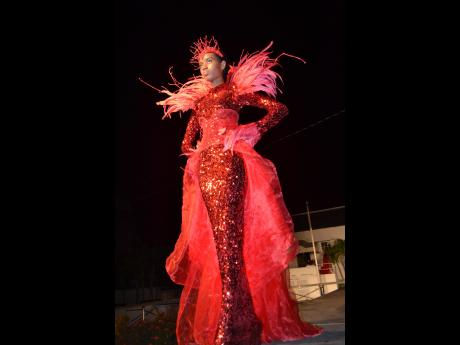 She certainly is a dream in this dress from the Flights of Fashion Fantasy Collection, inspired by Campari, designed by Christopher Maxam. 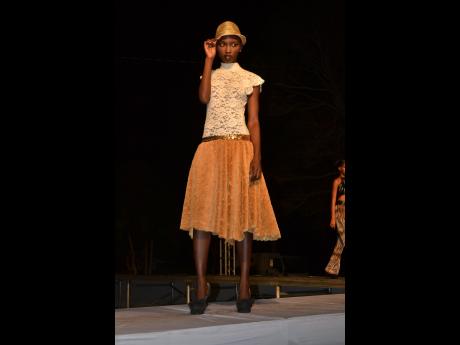 Kicking off at approximately 8:10 p.m., the event had CEO of Saint International Deiwght Peters as the consummate host and emcee. He flowed through the programme with ease, introducing the models and designers with much enthusiasm. The third staging of Clarendon Fashion Escape turned out to be a stellar event.

Segmented into three parts, the show opened with designs by Cecelia Devana. Red and gold, the predominant colours, were featured in her designs for the evening. Her edgy pieces were rocked by models, who strutted to a number of EDM selections courtesy of DJ Elmo's versatile playlist. Designer Kadian Nicely was next. Wearing exotic prints complemented by beats that oozed an Asian presence, the models flaunted Nicely's fashions, which were dominated by deep shades of red.

It wouldn't be a fashion show without a display of some flesh, and designer Nina

didn't disappoint with her sexy, knitted swimwear. The Saint girls had the males in the audience eating out of their hands as their toned legs stomped the runway to Samantha J's Hot Gyal Anthem.

Gregory H.O.D. Williams' collection was a hit with the crowd. The ladies sauntered along the quadruple-angled runway in dresses that ranged from full-length, form-fitting pieces, to funky, tastefully done see-through-up-top minidresses that flared from the waist. When asked what was the motivation for the pieces showcased, Gregory expressed that he wanted to put out items that were sexy and tasteful, with a "vintage-contemporary twist", and wearable by women of all ages, "from 15 to 70". The 'HOD' of fashion certainly proved why he is a winner of the coveted Avant Garde Designer of the Year Award, as suggested by The Weekend. He definitely 'earned it.'

After a 15-minute intermission that encouraged patrons to take advantage of variegated cocktails courtesy of the two Campari bars and enjoy jams currently running the airwaves, provided by DJ Elmo, segment two followed, with Neah-Lis' tropical-chic designs, after which Sophia Bernard-Fairman, Campari brand manager, took to the stage to thank everyone for attending.

Segment three began with Campari-inspired pieces, which were part of a collection called 'Flights of Fashion Fantasy'. Earth-inspired Accessories by Aela seemed to be a personal fave with the Saint CEO, who declared himself the proud owner of one of her bags. Male and female models were decked in her regal accessories ranging from earrings, necklaces, cross-body bags and clutches. Andre Shirley's "punk-funk designs" put a splash of colour into things with the men sporting bright pinks and neon suits with sneakers. Delisser Martin was up next with her stunning collection of predominantly two-piece swimsuits, which, needless to say, got the men in the audience going again - emcee included. African prints and tropical colours were the main staples in Tasha Simone Gordon's TNT Fashions, and Dexter Huxtable represented himself to the 'T' with his Spokes Apparel.

The finale collection was delivered by Kurt Campbell, 2015 Avant Garde Designer of the Year, who showcased 12 fanciful pieces of apparel with a "vintage meets contemporary" flair.

The audience was kept on its toes when Peters invited four persons to enter the stage for a game of 'Accessorise Your Partner'. The four persons, two males and two females, placed in teams consisting of one of each sex, was challenged to solicit the help of members of the audience in a bid to make their partner fashionable. Of course, the couple voted the most fashionable wins. The lawns of Halse Hall became abuzz with the couples trying to get help 'getting fitted', and bemused members of the audience rendering assistance. The winning couple, Noel Watson and Renna Davis, went all out, with Noel refashioning a pair of pants into a belt and Renna getting some classy sandals from her schoolteacher.

Ever proud of his models, Clarendon native Peters introduced up-and-coming faces for 2015 to the attendees. Among the male faces to watch are Denham Town native Kimali Morgan and Chadwick Simpson. Hot new female faces include top-five finalist of the 2014 Saint Fashion Face of the Caribbean and Clarendon native Tiffany Johnson; 2015 Fashion Face of the Caribbean and NEXT Model Management signee Alexian McDonald; and Jamaica's first plus-size model to be signed internationally, Tajai Mcpherson, who is now with Muse NY. Models acknowledged for being internationally signed are Kimberlyn Martin - a native of Toll Gate, Clarendon, signed to One Management; Kim Gordon, signed to Wilhelmina Models; Shane Guyher, signed to Fusion Model Management; Christina Knight; Alexa Budal and Anita Moore. Supermodels Kai Newman and Tami Williams were also mentioned and congratulated for flying the Saint flag high the world over.

In accordance with Ariana Grande's hit single Bang, Bang which signaled an end to the showcase, the evening's proceedings closed with a bang as Deiwght invited all models and designers to join him onstage for one last go on the runway, this time accompanied by Peters' Glenmurite volunteers, who helped make the show the roaring success it was.